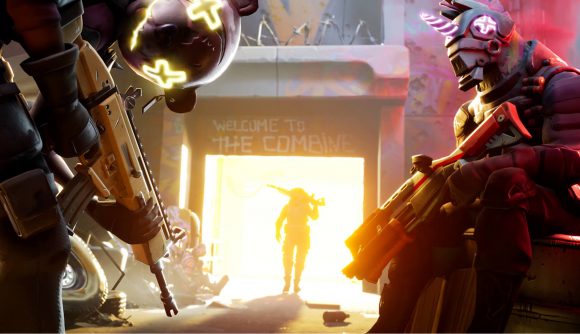 The “never-before-seen” weapon teased in the Fortnite V.10.40 patch notes has been revealed as the Legendary Tactical SMG.

The gold SMG can only be found in shooting stars that drop at the newly added location, Starry Suburbs. It already seems like an extremely powerful weapon with early reports from players showing it to have a DPS of 273. With high-tier loot in general dropping from shooting stars as well as the gold SMG, it’ll definitely be worth a visit to the new point of interest. Expect it to be a hotly contested zone.

Along with a new weapon and new location, Epic has also added a new playlist called The Combine. This is a speed run challenge with targets to shoot down on the way. It’s designed to gives players a chance to experiment with the new sensitivity settings and aim assist that has also been brought in with this patch.

Another notable feature of the new patch includes an improved matchmaking logic, which is likely being trial-ran before bots are introduced into lobbies in Season 11.

The full V.10.40 Patch Notes for Fortnite Battle Royale can be found below:

A simulation of the endgame scenario in Battle Royale — but with a condensed moving zone! Eliminate the competition as you avoid the Storm closing in. Randomised spawns and inventory items make each round unique.

You can queue with up to 15 friends.

Zone Wars: Desert
Created by JotaPeGame.
Make your way through a small desert town to the final circle. A diverse set of weapons and mobility allow for unique gameplay and lots of replayability.

Zone Wars: Downhill River
Created by Enigma.
Stay out of the storm as you move downhill through a river in this original-style Zone Wars island. Community launch pads and a consistent Storm path allow for familiarity after a few rounds.

Zone Wars: Vortex
Created by Zeroyahero.
This island puts a unique twist on Zone Wars with its mountainous terrain to traverse. The elevation change from zone to zone can be quite drastic!

Unvaulted
Bouncer
Rare trap.
Drops in stacks of three.
Found from Supply Drops, Vending Machines, Llamas, and Floor Loot.
Can be placed on floors, walls, or ramps/stairs.
Provides a jump boost in a direction perpendicular to its placement.

Enabled the Batman Grapnel Gun and Explosive Batarang in Arena and Tournament playlists.

Matchmaking
We’ve introduced improved matchmaking logic to core modes.
Players are now more likely to match with those of similar skill.
As players get better, so should their opponents.
We will slowly roll this out to core modes in all regions as we test and monitor how it performs.

New Sensitivity and Aim Assist settings on controllers.
For the details of these settings, please refer to our blog post.
Note: When using these settings, crosshairs turn red while pointed at a target that is within effective range, which is anytime before damage drop-off is applied.

The Combine
This new playlist is a great way to get familiar with the controller setting improvements mentioned above!
Though The Combine is useful for this purpose, it can also be played using “Legacy” controls, mouse + keyboard, or touch.
The goal in this playlist is to reach the end as fast as possible while eliminating all targets along the way.
There are leaderboards that allow you to compete for the fastest time with friends or other players.
Each leaderboard provides options to sort times by your preferred input device.

Starry Suburbs
A Rift Zone has brought back the ruined neighbourhood near Pleasant Park. However, the Rift Zone has given it a homeowners’ association — it’s a nice place to live now!
The neighbourhood is actually so nice that shooting stars make it their destination. Crush the stars to access powerful items, including a never-before-seen weapon!

Fixed an issue where players could use infinite sprays while in a Rift Zone.
The building piece choice no longer resets to the wall option when players using a controller have the Reset Building option turned off.

AUDIO
Bug Fixes
Resolved an issue in which the sound of a Chest would continue after a player opened the Chest.
The “Where is Matt” Emote music no longer restarts after every loop.

UI
The Controls Help option, a menu option meant only for mobile platforms, is no longer present on other platforms.
The Building Edit option is now located in the Building section of the Input settings rather than the Misc section.
Bug Fixes
Match stats no longer clip off-screen during a Victory Royale celebration.

REPLAY
Bug Fixes
The “You are in the Storm” warning no longer displays multiple times when switching spectated players.
The Shield Bubble’s sound effects no longer behave improperly when players scrub a replay.