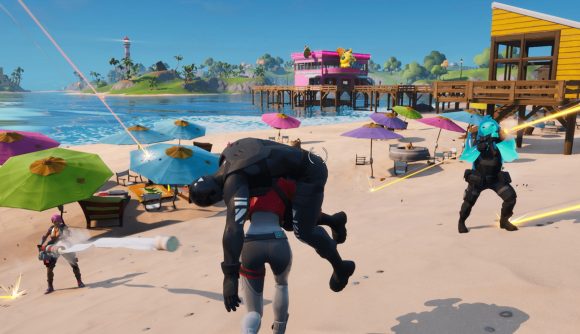 With the release of Fortnite Chapter 2, fans have not only been treated to a new map but also a number of fresh mechanics and features that we’ve never seen before in the battle royale.

As well as now being able to go fishing or navigate the new island using boats, the ability to pick up and throw downed teammates and enemies has also been added to the game. While at first this just seemed to be a practical addition that could allow you to move a downed teammate out of danger to a safer spot, players have quickly discovered that it can be used to humiliate their opposition.

Fortnite streamer Ali ‘Myth’ Kabbani managed to pull off a comical finisher move on a downed opponent using the new feature. After downing an enemy, he picks them up, throws them over his shoulder and proceeds to take them to the very top of a building in Slurpy Swamp. He then proceeds to shout “see you later, b****! See ya!” before launching the enemy player off the roof to finish him and bursting into laughter.

While Myth has managed to be on the right side of the new mechanic, another big streamer, Ben ‘DrLupo’ Lupo, unfortunately wasn’t so lucky as he was whisked away from his own team by an enemy player and dumped into a river.

The new Fortnite update lets you carry enemies and throw them around. Watch as @DrLupo gets tossed. 😂 pic.twitter.com/fxr1YkdoAQ

With Chapter 2 having been live for only a few hours, it’s safe to say we can expect to see some more inventive (and probably hilarious) uses for this new mechanic in the near future.

Chapter 2 burst into life today, October 15, with a spectacular introduction to the new Fortnite island, resulting in some some big reactions from popular streamers, including Myth and DrLupo.