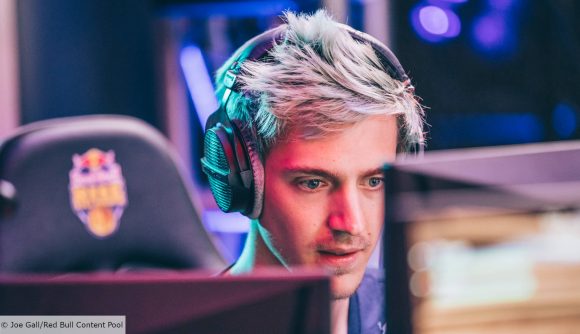 Ninja let his thoughts on the competitive Fortnite scene be known in an uncensored rant this weekend. While watching the FNCS warmups, the streamer noticed a pattern in the random lobbies. Lesser-known teams would be more aggressive than experienced teams, often catching them by surprise.

Both teams would suffer casualties that would adversely impact their performance for the remainder of the round – and one would be wiped completely of course. Ninja suggests that in many Fortnite tournaments between high-level players, there are unspoken rules that must be followed regarding where you drop compared to other teams, and when you push each other.

As one of the biggest streamers and the second-most famous blue-haired gaming icon (that accolade goes to Sonic, sorry), his opinion carries a fair amount of weight in the community. “Without a dedicated league of respected teams and respected players who obviously know how to play at a high level… I don’t think that there will ever be full success and legitimacy of Fortnite competitive.”

Ninja believes worse players are “pushing random dumb kills”, and these players “ruin the game for themselves and the team that they’re griefing”. He didn’t explain how so-called “respected players” would be selected, or the criteria that a team would need in order to meet to enter a dedicated higher-level league. After all, that’s what the open rounds in FNCS are for – qualification – and the teams that do the best go through, based on their performances but not previous experience.

My thoughts on competitive Fortnite. pic.twitter.com/PdZHahIw2E

However, he said he is “fine” with the Cash Cups, which he believes often involve stream sniping and lower-quality players, but that a high-level league would put Fortnite on the esports map.

“There needs to be leagues and lobbies where they [established teams and players] can queue against teams who are just as good, who have qualified, and who are consistently there.”

Fortnite is unique in the esports scene because of the fact that many of its tournaments are open to anybody who qualifies – whether they’re signed to a professional team or not. Losing this openness would close the door to many players who aren’t already a part of the esports scene, and would make tournaments less accessible to new players.