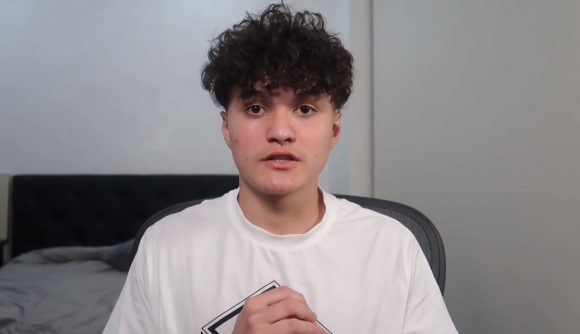 A Fortnite player, who signed for FaZe Clan in April this year, has been banned permanently from the game for using aimbot. Jarvis ‘Jarvis’ Kaye used the cheat in a number of solo and playground games on his alternative account to create videos for his YouTube channel, but he has since revealed he’s been slapped with a lifetime ban.

The British 17-year-old posted a video explaining this situation on his channel yesterday, where he apologises for his actions and explains the situation. And it seems that despite acknowledging that cheating in games is completely unacceptable, Jarvis says that it didn’t even cross his mind that he could be banned for using aimbot.

“I’ve actually been banned on Fortnite for life,” Jarvis says in the video, which is entitled ‘I’ve been Banned from Fortnite (I’m Sorry). “Recently, I’ve posted some videos of me using aimbot in solos and playground mode. All I was thinking about while I was making those videos was just how entertaining and interesting these videos would be for you guys to watch. It didn’t even cross my mind that I could be banned for life on Fortnite.

“I want to be clear that this is the first time I have ever done something like this, and of course, I have never done this in a competitive game mode at all. I don’t know what I was thinking.”

Jarvis gets quite upset in the video, in which he explains how Fortnite has changed his life. With a lifetime ban now meaning that he’ll never be able to play the battle royale title casually or competitively ever again, it’s unclear what the young player will do next.

Since receiving an outpouring of love from his own community, Jarvis looks like he’s come to terms with the ban, admitting that he’s “going to take accountability for his actions.”

I’m going to take accountability for my actions and I understand completely why this has happened, I just wish I had known how severe the consequences were at the time and I would have never thought about doing it. I love all of you who still support me, this is not the end.

A #FreeJarvis hashtag has also appeared on Twitter, following complaints that two other players, Damion ‘XXiF’ Cook and Ronaldo ‘Ronaldo’ Mach, were only banned for two weeks after they were found to be cheating in the Fortnite World Cup qualifiers. Either way, using aimbot on live servers to create content isn’t the best of moves.

Both Epic Games and FaZe Clan are yet to release a statement.