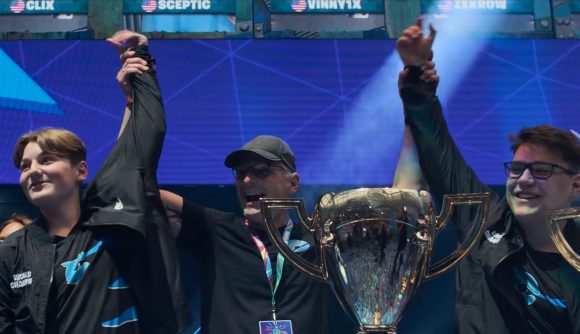 Esports organisation Cooler Esports has announced that it is ceasing operations and disbanding its Fortnite and Apex Legends teams. In an announcement post, Cooler says that it is shutting down due to “financial reasons” that were “accelerated by COVID-19”.

Cooler was best known for its presence in Fortnite, and was the first organisation to have players win at the Fortnite World Cup in 2019. The pairing of Austrian player David ‘Aqua’ Wang and Norweigan Emil ‘Nyhrox’ Pedersen won the Duos side of the tournament, netting them $1.5 million each. While Nyhrox left the organisation shortly after that victory, Aqua has remained on Cooler’s books until its disbandment today.

As well as making strides in Fortnite, Cooler looked to make a mark on Apex Legends esports too. It first picked up a roster in 2019, but signed its most recent trio as recently as October this year. The European squad of Oscar ‘Yuki’ Jiang, Matthew ‘SirDel’ Biggins, and Casper ‘Gnaske’ Præstensgaard will now become free agents.

The trio has already qualified for the EMEA side of the $1 million Apex Legends Global Series Championships, but their spot will remain safe as it is tied to the players and not the organisation.

Cooler is one of the most notable esports teams to sadly shut down due to the pandemic, with the likes of Danish organisation North also ceasing operations this year.