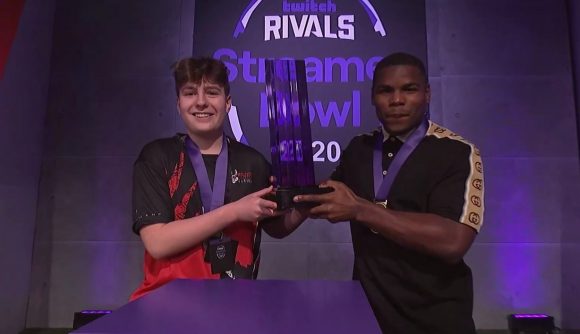 The event, which sees 10 well-known Fortnite influencers and pros draft a battle royale-loving NFL player to compete in a duos tournament, offered up a total charity prize pot of over $500,000 and precedes the Super Bowl this weekend. Clix and Cohen, who plays running back for the Chicago Bears, absolutely dominated the field and finished the vent with 69 points – 23 more than the second-placed duo of Turner ‘Tfue’ Tenney and Arizona Cardinals’ Kyle Murray.

According to Twitch Tracker, the Streamer Bowl drew in a huge audience, with over 110,000 people watching the action. As well as Clix and Tfue and a wealth of NFL stars, other big names in the Fortnite community were in attendance, such as Ben ‘DrLupo’ Lupo, Tim ‘TimTheTatman’ Betar, and Fortnite World Cup Solos winner Kyle ‘Bugha’ Giersdorf.

While only managing to finish in second spot, Tfue was awarded the Streamer Bowl MVP award after pulling off some ridiculous plays, such as this ridiculous falling shotgun elimination to win the game against Mason ‘Symfuhny’ Lanier.

World Cup winner could only manage a fourth place finish despite being paired with Pittsburgh Steelers’ JuJu Smith-Shuster, who’s previously played alongside the likes of Tyler ‘Ninja’ Blevins on his livestreams.