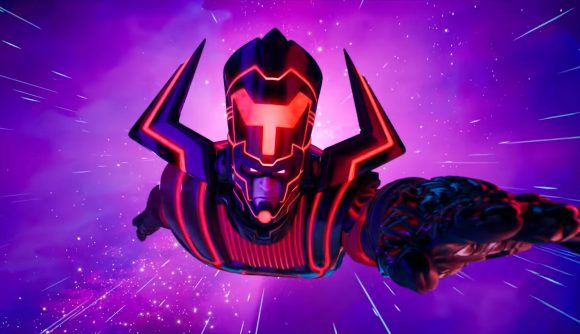 New weapons and locations arrive alongside the new storyline, while the pump shotgun has been unvaulted after sitting out Season 3. This classic returns to the game joined by a new arrival: the Stark Industries Energy rifle. The Stark weapon is uncommon, and is a mid range rifle with a slow semi automatic fire rate. You can find it at crashed Quinjet sites across the map, although you’ll have to fight of Stark Industry robots to grab yourself one.

As for the map, there are two major changes, with one of them happening before the game ever begins. In one of Fortnite’s most stylish seasonal additions ever, you now wait for your match to begin on the SHIELD Helicarrier.

You even get an escort from a Quinjet while the Battle Bus takes you into the map proper.

The other major change to the map sees Fortnite get a little slice of Latveria as Doctor Doom takes up residence in Pleasant Park. In Doom’s Domain – its new name – he appears as a mini-boss and will grant you access to his vault and his gauntlets if you can take him out.

As for the storyline itself, Galactus is the Devourer of Worlds, in that he literally eats planets. He’s generally considered Marvel’s most powerful villain, dwarfing the might of Thanos, so this season is sure to be a spectacle.

If you’re really not that fussed on the aesthetics and just care about the meta, the major takeaway is that the pump action shotgun has been unvaulted, but the tactical shotgun and regular SMG go into the vault instead, along with the Epic and Legendary variants of the pistol and hunting rifle.