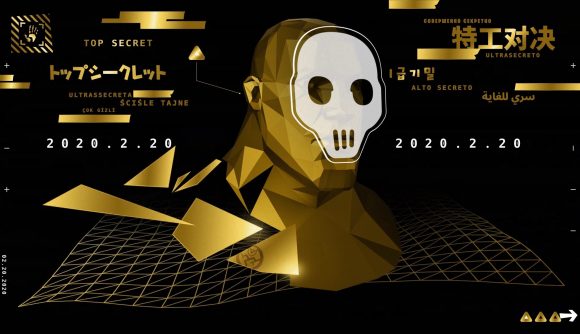 Epic Games has been relentlessly releasing clues and teasers, both online and in-game, ahead of the release of Fortnite Chapter 2, Season 2.  Golden items have started appearing in the game while cryptic images and webpages have appeared online. Dataminers have been hard at work looking for hints and infamous leaker Hypex has seemingly uncovered the name of the event: TakeOver.

Hypex found the name through the Epic Games launcher, according to PCGamesN although admits that the moniker could simply be a codename used by developers internally. Still, lots more information is on the way with the event kicking off on February 20, 2020.

So far, the clues seem to suggest a spy theme with fans being led to believe helicopters and ships will be added to the multiplayer game thanks to a series of images. There have also been pictures displaying lightning and pyramids, the latter could be the reason for the odd inclusion of a cat image included in Fortnite.com’s source code.

Further speculation has caused many fans to hypothesise the event will make large changes to the middle island which appears in the background of one of the latest teaser images which also conveniently displays a helipad in the bottom left corner.

On top of that, the golden face which has been painted around the town in-game is likely to be that of the Chaos Agent from Chapter 2 which, once again, would fit in with a potential espionage theme.

Following on from Fortnite’s longest season so far, the new update is going to bring monumental changes including an entirely new in-game physics engine. Epic will switch over to the Choas engine which is said to allow for more realistic and detailed environment destruction. If this new update does, in fact, involve ships and helicopters alongside these new physics, online games are going to become quite the cinematic spectacle.