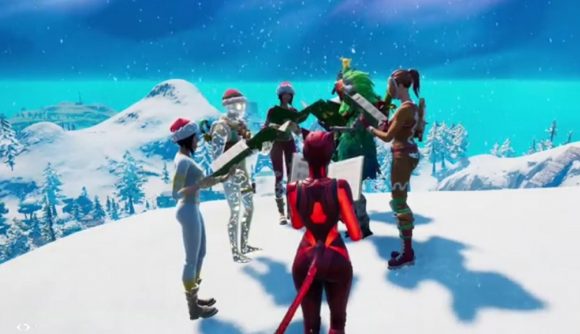 Online gaming can be a toxic environment, especially if you have voice chat turned on and teammates are getting salty. So it’s always good to see players spreading some positivity and having good vibes in competitive games.

Nothing embodies this better than Fortnite’s new carol singing emote. The emote itself sees players pull out a songbook and start singing a Christmas hymn. It’s more fitting with Songs of Praise than a battle royale, but players have got behind it and are coming together to belt out some beautiful harmonies.

Players are coming together to spread festive cheer, even in the most competitive settings. In a solo match posted on Reddit, user u/Mesuxelf found the six remaining members of their solo game gathered on top of a snowy mountain to sing carols. There was a nervous moment as they approached with their weapon raised, but Mesuxelf quickly holstered their rifle and drew their songbook to join in.

It’s great to see some positivity in the game – and the festive singalong is the perfect way to spread holiday cheer. After all, we’ve all watched Elf, right? “The best way to spread Christmas cheer is singing loud for all to hear.”

On a solo with 7 people left, we chose love, not war from FortNiteBR

However, it didn’t last long. According to Mesuxelf, shortly after their choir session finished, one player sent an RPG round into the other six, which is a surefire way to ruin Christmas for all involved. Before the unfortunate explosions, though, this moment was wholesome enough to make the Grinch’s heart grow a couple of sizes.