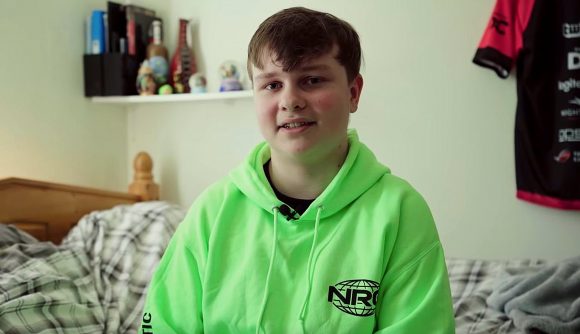 He’s one of the most in-form Fortnite pros in the world, but even someone of Benjy ‘Benjyfishy’ Fish’s calibre can still be caught out by one of the most well-known tricks in the book on Chapter 2’s new map.

The NRG player was competing in his first game of the day in a Solo Cash Cup and had just finished eliminating players and farming up at Lazy Lake. To rotate towards the circle, Benjyfishy used one of the quickest means of travel by swimming up the river adjacent to Lazy Lake towards the centre of the island.

On the way, however, is the infamous waterfall, which has claimed the lives of many over-confident swimmers and even has an easter egg dedicated to the numerous players who have missed landing in the river below. The location has also become a hotspot for meddling players to leave a trap for unsuspecting players by building over the river, resulting in your instant elimination – even if you get your aim right.

On reaching the waterfall and realising he was falling towards some lethal builds rather than the safety of the water, Benjyfishy shouts: “Oh no! There’s no fucking way, bro. There is no way!”

The classic trap saw him finish in a disappointing 47th in his first game after picking up three kills. The frustrating start to his Cash Cup didn’t seem to tilt him too badly though as he pushed on to finish the tournament in third place.