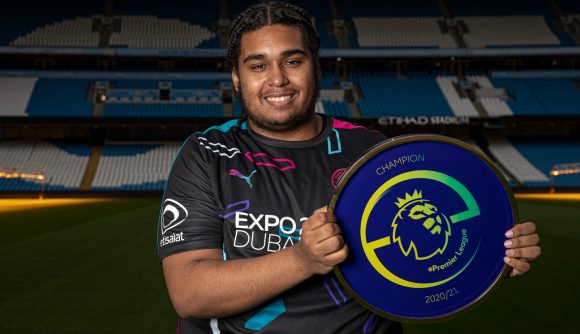 The ePremier League will return for the FIFA 22 esports season, with all 20 clubs from the Premier League taking part and players competing for the competition’s biggest ever prize pool: £100,000 (roughly $137,000).

While the ePremier League has always been highly competitive and been a favourite event for FIFA pros, who often get to represent the clubs they support, a main criticism has always been its low prize pool. For the FIFA 22 Global Series though, the ePremier League will offer more than double the cash it did last year, stumping up a £100,000 prize pool.

The other big change for the ePremier League is a shift to a team-orientated format. While clubs in the past would field two players each (one competing in the Xbox bracket, the other competing in the PlayStation bracket) it was still very much a solo event, with the winning player of each bracket facing off in a cross-console final to determine the overall winner. For FIFA 22, there will be a winning club, rather than a sole winning player, with the results of their Xbox and PlayStation players being combined during the Grand Finals stage.

As per usual, prior to the Grand Finals, each club will host qualifier events to determine their representatives. This is a completely open competition, where anyone from casuals to former FIFA world champions can try to qualify.

On top of the exciting prize pool and format news, the ePremier League also intends to return to a live, in-person Grand Final. While the venue is yet to be confirmed, and hosting the event live is still subject to COVID restrictions, this is still a big plus.

The ePremier League is BACK 🤩⁣
⁣
Want to represent your club? Registration is open now 🙌⁣
⁣
Open to residents in the UK 🇬🇧⁣

The ePremier League Grand Finals are scheduled to take place Between March 27-28, however online qualifiers for clubs start as early as mid-November. A full schedule for qualifier events and information on how to register can be found here.