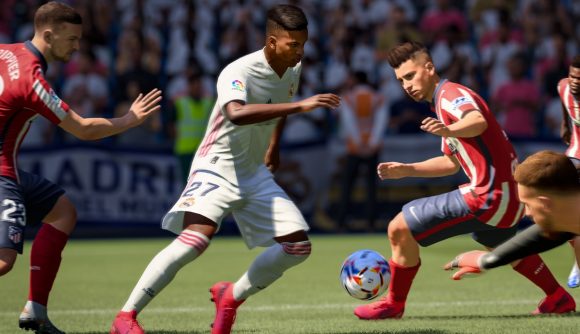 Danish wonderkid Anders Vejrgang has obliterated a FIFA record thanks to his remarkable winning streak in FIFA 21 Ultimate Team’s FUT Champions mode. We’ve been tracking the 14-year-old’s incredible form and since the release of FIFA 21 Vejrgang has remained unbeaten in FUT Champs Weekend League.

Following another successful 30 victories this weekend, Vejrgang’s record is now a staggering 300-0 – a feat that The Loadout understands no player has achieved previously. Throughout the FIFA 21 season, Vjergang’s unstoppable form was mirrored only by one other pro, Feyenoord Esports’ Julian ‘Julianberg1203’ van den Berg, who has matched the youngster most of the way. However, he finally faltered at the weekend and his unbeaten streak ended at 297, making Vejrgang the undisputed king of FIFA 21 FUT Champions.

What makes Vejrgang’s achievements more astonishing is that at just 14 years of age, he isn’t even eligible to compete in the FIFA Global Series, and we’ll have to wait until the FIFA 23 season to finally see him get his shot (subject to rule changes, of course). He is, however, signed to a team: RBLZ Gaming, the esports division of Bundesliga football club RB Leipzig.

Tweeting out his accomplishment, Vejrgang jokes that he still hasn’t showered or seen sunlight, but that he is a record-breaking FIFA player. Priorities of a 14-year-old right there, good stuff.

Still no shower, no sunlight and no bruno pens for an another week, sorry haters. pic.twitter.com/5jqvfcgZLG

Vejrgang’s notoriety in the FIFA scene has seen his Twitch streams soar in popularity as viewers pour in to pick up the secret to his success. This weekend saw his FUT Champions run peak at 23,000 viewers.