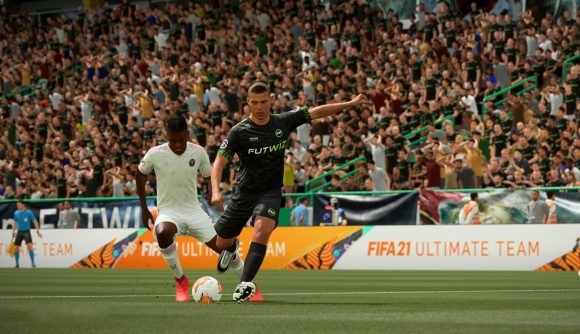 EA has revealed which esports organisations will have their colours represented in-game for FIFA 21 as it continues to grow its efforts to promote the competitive scene.

With the addition of esports team kits in FIFA 19, to last year’s stadium tifos featuring pro players such as Donovan ‘Tekkz’ Hunt, to FIFA 21’s Global Series viewership rewards system, the esports scene is now being pushed more and more in-game in an attempt to attract new eyes to tournaments. While FIFA’s lineup of kits regularly include esports juggernauts like Complexity and Team Vitality, they also feature FIFA-centric organisations like FUTWIZ, giving them vital exposure among football crazy fans.

“This is our third year and the program as a whole has grown massively to the point where they’ve embraced us having our own partners and sponsors on our kits,” FUTWIZ CEO Dan Bellis, one of Network N’s partners, explains. “We’ve got Elgato on our kits now, and that’s something EA have been really great at bringing in.

“The engagement we’ve seen has been phenomenal. We’ve seen hundreds of thousands equip our kit in-game throughout FIFA 20 and tens of millions of matches played in our kit. When you think about watch minutes and engagement figures, it’s been a massive benefit to us.”

With the increased presence of its brand in FIFA, Bellis is now able to do something that brings FUTWIZ in line with established esports organisations: launch a physical kit for fans.

It’s time to pick your team.

Gear up you squad with your favourite #FGS21 team’s kit 👕

Login to #FUT21 until Sunday, November 1 at 11PM⏰ BST 🇬🇧 to claim your kits! pic.twitter.com/IuyVdMzFxj

While limited numbers of physical kits have been made in the past for pro players to wear at events, FUTWIZ has established a demand to make these kits available for the masses.

“As a brand we’re almost solely in the digital space,” Bellis says, “but with our pros taking part in esports tournaments we’ve always had people come up and say: ‘Hey, I love your kit, where can I get one?’ But now it’s even people seeing it in game and messaging to say ‘it’s great for my pack luck’ or that they use it in FUT Champions. Then they’re asking: ‘When can I get a real one?’

“Over the years it’s something we’ve wanted to aim for. This is the third year making our own kit from scratch, using very talented designers within the FIFA community, and we’ve got a really unique kit this year with the digital camo theme. Quality has been a big thing, we wanted to get it right the first time we unleash it on the public. So now we’re happy to be able to finally give our fans this.”

As seen in #FIFA21, the real life #TeamFUTWIZ shirt is now available to order!

Launching alongside our new store, excited to finally be able to provide an opportunity to ship them worldwide

Our pro players have discount codes, be sure to follow them 👀https://t.co/eLVosnrU9M pic.twitter.com/KYzREVaTSN

While shirts for massive esports organisations who have teams in CS:GO and League of Legends practically sell themselves, this type of in-game representation is crucial for organisations that have FIFA at the core.

Moreover, this year’s lineup of kits can help establish the new names on the block, like Gareth Bale’s Ellevens esports team.

Continuing to make these cosmetics free – unlike a lot of esports team skins in other titles like Rainbow Six Siege – also means that the net for exposure and reach can be cast more widely.

While it’s only a speck of content in FIFA 21’s mass of customisable options, esports team kits continue to be more valuable than you might think.