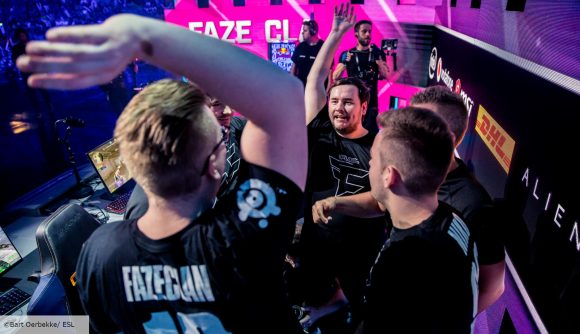 FaZe Clan has announced that it’s partnered with Premier League champions Manchester City as of September 26. The partnership will see the two collaborate and “create new experiences for fans of both football and esports.”

It will also see a joint effort in the FIFA esports scene, with players from both FaZe and Man City sharing a new training facility. This will see two talented English players – FaZe’s Tassal ‘Tass’ Rushan and Man City’s Shaun ‘Shellzz’ Springette – being able to train side by side.

This is not the first time that Man City – one of the first Premier League sides to venture into FIFA esports – has partnered with an esports organisation. Back in 2018, the club cut a deal with Epsilon which saw the Manchester City brand being used for Epsilon’s FIFA fixtures at the Gfinity Elite Series. However, Epsilon ran into recent financial difficulty and a number of their FIFA players departed in the past 12 months due to wages not being paid. Hopefully this new venture is considerably more successful.

According to reports from Dexerto, this partnership will also see Manchester City’s footballers wearing training gear featuring the FaZe logo. The players will begin to wear FaZe-branded items at their next Premier League fixture.

FaZe’s professional Fortnite player Nate Hill is also a massive Manchester City fan, so will likely feature in a lot of the upcoming content and collaborations between the two.

Lee Trink, FaZe Clan chief executive officer, said in a press release: “This alliance with Manchester City creates a powerful opportunity to join our collective fan base and cultures on and off the field. FaZe Clan will continue to push the boundaries of gaming and esports by engaging our fans with experiences that are meaningful, memorable and surprising.”