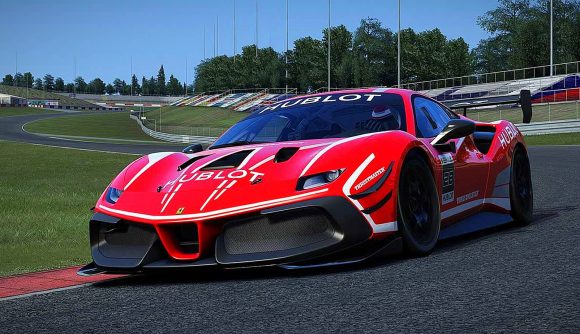 One of the most famous names in motorsport, Ferrari, has unveiled a brand new sim racing competition that will see the winner become the next addition to Ferrari’s lineup of esports drivers.

The Ferrari Esports Series will be an open competition to any budding sim racers and will be held on the Assetto Corsa game. It will put amatuer racers from across Europe against one another in the exact same car: a Ferrari 488 Challenge Evo, which is exclusive to the Esports Series’ competitors. The fastest amatuer drivers from the qualifying competition will then enter the AM Series.

Alongside the AM Series will be the PRO Series, which will see 24 professional sim racers invited to do battle against each other. The 12 fastest drivers from both AM and PRO will then meet in the finals in November. The overall winner will then become the third member of Ferrari’s current sim racing team alongside reigning Formula 1 Esports Series champion David Tonizza and his teammate Enzo Bonito.

Ferrari’s Formula 1 star Charles Leclerc – who along with fellow F1 drivers like Lando Norris and George Russel helped drive the popularity of sim racing upwards throughout the coronavirus pandemic – will also act as an ambassador for the competition.

This a significant move from Ferrari, who has previously been dubious about esports and was notably the only F1 constructor not to field a duo in the 2018 F1 Esports Series.

Drivers, fasten your seatbelts!
Welcome to the Ferrari Championship, the tournament where Pro and casual players face each other!
Take a look at what’s coming! #FerrariHublotEsportsSeries #FerrariEsports @Hublot @TMThrustmaster pic.twitter.com/lc2Sajt1an

However, with Tonizza’s success in F1 esports and its real F1 star showing just how successful and popular sim racing has become in the motorsport world, it appears Ferrari has had a real change of heart towards esports.

Registration for the amatuer qualifying rounds opens on August 7, but it is only open to those based in Europe and over the age of 18. The list of pro sim racers being invited has not yet been released.