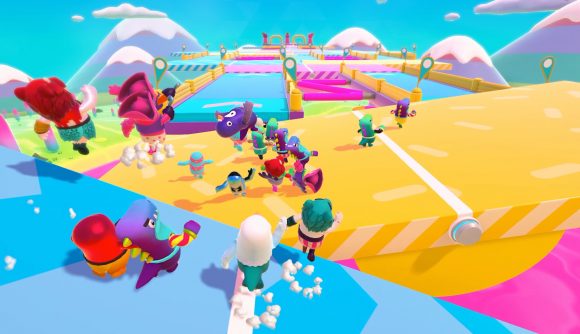 Fall Guys takes the madcap obstacle course fun of game shows like Takeshi’s Castle, It’s A Knockout, and Total Wipeout and combines them with the thrill of a battle royale. Each round, you must make your way through a series of gates, bridges and turnstiles as fast as you can or face being eliminated. A handful of the events instead task you with team play, such as rolling a coloured ball down a slalom faster than the other teams, or several variations on the game tag.

It has been a mammoth success since launch, topping the Twitch charts on launch day ahead of Just Chatting, and a few days earlier even made the top 12 during a ‘secret’ internal test.

Twitch Rivals are official Twitch events for the biggest esports, designed at fostering a community around the most popular games by squaring off the best players in the world. Typically, Twitch Rivals events are held for the core esports games, such as Fortnite, League of Legends, and FIFA. Now, Fall Guys joins that prestige list.

So, we keep hearing about this game…

So… we’re making it a thing. Twitch Rivals @FallGuysGame.

In their Tweet, Twitch included a stream clip from Saqib ‘Lirik’ Zahid, a streamer with over two million followers, who tells his viewers “they should do” a Twitch Rivals for Fall Guys, and that he would participate if they did. He’s far from the only player to have called on Twitch to set up a Rivals event for the game though, and all signs point towards the future Rivals event being another huge smash hit for Mediatonic’s indie game.

Part of Fall Guy’s success has been down to the game releasing to PlayStation+ subscribers for free, something Rocket League also did at launch five years ago. Since then, Rocket League has enjoyed continued popularity, both at a casual and competitive level, and their longevity is surely something Fall Guy’s will look to emulate through Twitch Rivals.