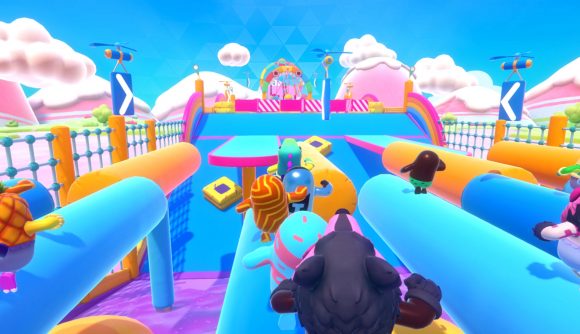 When Fall Guys announced a charity auction for an in-game skin, there were four consistent bidders vying to win the crown. However, as the auction drew to a close, they decided instead to collaborate on one mega bid worth $1,000,000 to raise as much money for charity as possible.

The bidders were Tyler ‘Ninja‘ Blevins, YouTuber Jimmy ‘MrBeast’ Donaldson, G2 Esports, and AimLab, with the money going towards SpecialEffect, a British charity which helps increase accessibility and enjoyment for gamers with disabilities. While the initial prize was a single skin for the winner, Fall Guys has revealed that there will now be four special skins in the game.

The auction started on August 17 and while it attracted a decent number of bidders, the four winners were grabbing the lead off each other consistently from a few days in. This way, the players get more skins, the bidders each get to win, and most importantly, the charity gets a lot of money.

While Fall Guys does feature some team games, it is generally not a game which fosters collaboration, as anyone who has played See Saw will know. Here though, it’s great to see everyone band together to earn as much money for charity as possible.

Prior to the mega bid, the winning bid had been $510,000 from YouTube gaming channel FGteev.

Throughout the contest, the four bidders shared mock-ups of their prospective skins, with AimLab collecting them together, holding up a SpecialEffect themed crown.

Probably the spiciest team up since The Avengers??????https://t.co/Q2G3h9UyDh

It is unknown when the skins will debut in Fall Guys, although if they can be prepared in time, it would make sense to attach them to the Season 2 update, which releases some time in October. For Ninja, it will be his second in-game skin of the year, following his addition to Fortnite as part of their Icons series.