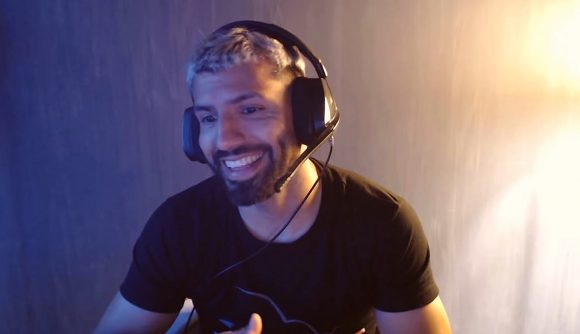 Fall Guys: Ultimate Knockout is taking the world by storm. The game has sold over 2 million copies on Steam alone in its first week and is a hit with Twitch streamers – including Manchester City star and avid livestreaming fan, Sergio Aguero.

It turns out that the Premier League’s highest-scoring foreign player isn’t just lethal on the turf, but is terrorising defenders in jelly bean form too. The Argentine decided to stream some Fall Guys action for the first time on his channel, and over 35,000 were watching when he found himself put into the team minigame Fall Ball. The objective, as many reading this will know by now, is to score more goals as a team than the opposition – something the City striker is a born natural at doing.

So when Aguero – with the score tied at one a piece and the game in overtime – had the ball set up perfectly for him in front of the opponent’s goal, only one thing was going to happen: a perfectly hit strike (or headbutt, I suppose) that sailed over the defence into the back of the net.

Over 150,000 people have watched the clip of the exquisite finish and Aguero’s extremely animated celebration.

But doesn’t that overtime goal remind you of another famous Aguero moment, football fans? Of course it does. And guess what, the Fall Guys goal is even better with Martin Tyler’s iconic commentary over the top.

To see Aguero get more animated in celebration at Fall Guys than he often does slotting away a goal for City shows just how addictive and entertaining this game is. There’s a reason why it’s had 23 million hours of content on Twitch already, ya know.