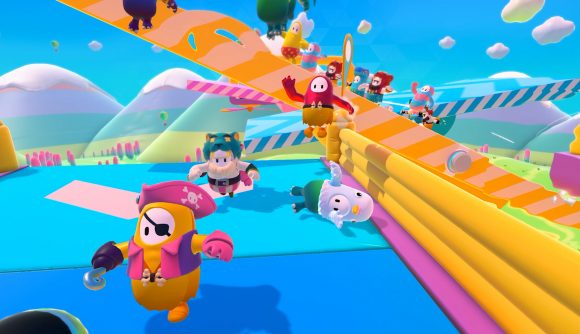 Fall Guys: Ultimate Knockout has been the talk of the internet since its launch in early August. Mediatonic’s game, which is free right now for PlayStation Plus players, has proven to be an absolute hit online, captivating big audiences on Twitch. Well, according to the latest figures, more than seven million players have stumbled their way through neon-coloured courses on Steam alone.

Since being released on August 4, more than seven million copies of the game have been sold. When the game hit two million copies on Steam. Mediatonic confirmed more than 1.5 million crowns had been grabbed, an astonishing 23 million hours of Fall Guys content had been watched in that time, and 60 million Fall Guys had fallen to the slime. Expect those totals to be much bigger now.

In addition to Fall Guys’ success on Steam, Mediatonic has also confirmed that it is the most downloaded PlayStation Plus game of all time – beating Rocket League’s incredible launch in 2015. Although Sony hasn’t given the official figure for the amount of copies shipped in August, we’d expect it to be in the millions.

The game’s success started pretty early on. After a packed closed beta, an enormous “secret test,” and Twitch results triple AAA developers dream of, it’s no surprise that Mediatonic is delighted with the early results.

“I think we’ve probably sold ten times what we thought we would,” game designer Joe Walsh recently told The Loadout in a big Fall Guys interview. “Now we’re setting up some pillars for us as a studio so that Fall Guys continues to run well.

“We’ve launched and the game has been well received, but it’s really important for us to make sure the community knows we’re working on stuff and we’re listening.”

Of course, there are still players trying to spoil the fun for everyone else. Developers are already dealing with Fall Guys hackers and custom names have been disabled on PC because some players still can’t be trusted to be sensible.

Bad eggs (or should I say jelly beans) aside, Fall Guys has had an impressive start and it signals a bright future ahead.