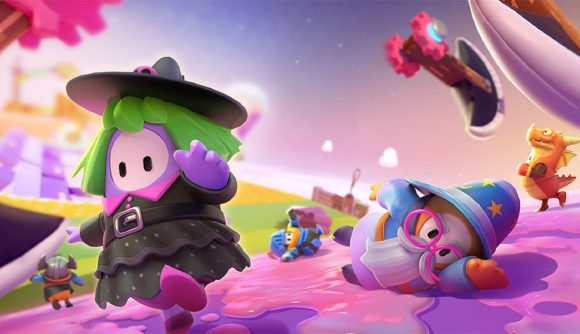 Fall Guys Season 2 has brought a medieval theme, including wizard, dragon and ogre (or is that an orc?) skins and new castle-storming games. However, one addition that has largely slipped under the radar is the addition of the Gauntlet Showdown mode.

Gauntlet Showdown is a limited-time mode that eliminates all team-based games from your run, meaning you won’t be let down by the rest of those pesky yellows in Fall Ball or Egg Scramble. However, playing this mode will mean you can only play two of the brand new levels in Season 2.

Knight Fever and Hoopsie Legends offer solo players new challenges, but Wall Guys and Egg Siege are team games, so won’t be a part of Gauntlet Showdown. The mode is currently available to play for seven days. Developer u/FallGuysJoe on the Fall Guys subreddit explains that this is so they can monitor the trial, but it is “possible” it could become permanent further down the line.

The team will be monitoring player reception and matchmaking times to see if the mode will be made permanently available. However, some players are already finding that the lack of different levels is making Gauntlet Showdown a little stale, especially towards the latter stages. Reddit user u/el-Diable found that in four consecutive games they played the Fall Mountain final, suggesting it could be the only option.

You asked for it, Mediatonic did it! You can now play without any team games! from FallGuysGame

As well as the Gauntlet Showdown mode, Fall Guys Season 2 has increased the game to 60FPS on PS4 and given many levels a visual overhaul. With a new battle pass and levels, Season 2 will give Fall Guys a fresh lease of life.