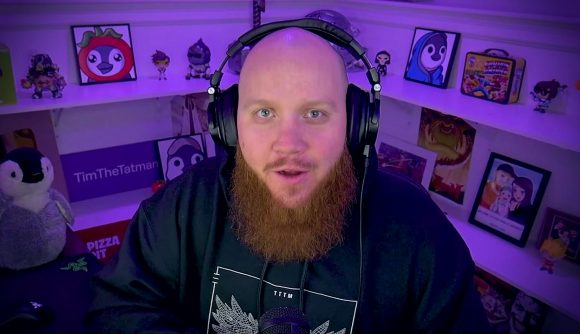 If you’ve been following the official Fall Guys: Ultimate Knockout Twitter account, you’ll have noticed that in between hosting a charity auction, they’ve been roasting Tim ‘TimTheTatman‘ Betar non-stop. The streamer is yet to get a crown in the battle royale, and the official jellybeans aren’t afraid to let him know about it.

Despite being one of the biggest streamers in the world, TimTheTatman just cannot bag a win in the game. Recently, F1 driver and fellow streamer Lando Norris offered him a proposition; first one to win a crown gifts the other 100 subs. Unfortunately for TimTheTatman though, after agreeing to the wager, he wasn’t even able to stream once before Lando swooped in and won a crown with ease.

At the time of writing, TimTheTatman is still without a Fall Guys crown, and at this rate who knows if he’ll ever win one. All we know is that he owes Lando Norris 100 subs, for the princely sum of $500.

In some ways, however, TimTheTatman is the big winner here. He already has one of the highest follower counts on Twitch, and he has literally become a meme for his poor skill (and occasional bad luck) in Fall Guys. With the official account taunting him, his relevance and audience only grows, with the streamer seeing huge numbers, even if he’s not seeing the crown.

I’m getting a win tomorrow

In his most recent stream, TimTheTatman pulled in 140,000 live concurrent viewers, although, and we cannot stress this enough, the professional gamer still did not win a crown. Not one. Ever.

Of course, part of that popularity comes from Fall Guys itself. The game has been a smash hit since it debuted, having topped the Twitch charts on the day of release and selling two million copies in its first week.

In fairness to TimTheTatman, at least he hasn’t dislocated his shoulder playing Fall Guys, as one streamer did yesterday. Still, if he goes without a win for much longer, who knows what will happen. Maybe he should read our Fall Guys tips guide.