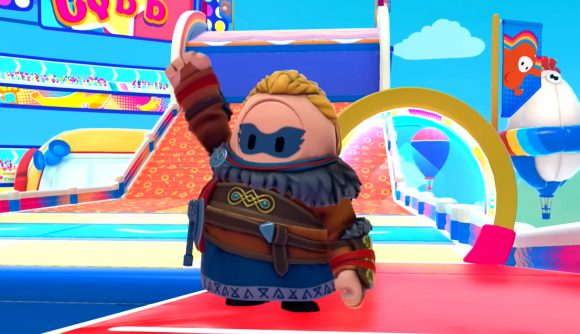 Are you ready for your next leap of faith as jelly beans? Well, you should be. The curtain on the Fall Guys Spartan Showdown event has now closed, but the team over at Mediatonic has stealthily been working on a replacement and it involves Odin and Eivor from Assassin’s Creed Valhalla.

The Abstergo’s Challenge event will be available to play from July 7-July 11 and it comes with a whole host of new rewards and Fall Guys skins to unlock. Odin the All-father and Eivor the Wolf-Kissed skins will be available in the store, but it looks like a couple of Assassin’s Creed-themed cosmetics like Apple of Eden backpacks will be available through the challenge system too.

Those keen on team games will be pleased to see that it looks like a  variant of Egg Scramble will be added with this event. Based on the trailer it looks like stealthy players will need to steal sweets away from another team in order to win.

This isn’t the first time Assassin’s Creed has featured in Fall Guys. Ezio joined the game as a skin in June and a leap of faith celebration was added to the game as part of the free-to-play update.

does my Eagle Vision deceive me?!

Odin and Eivor are coming to Fall Guys??

AND we'll have more rewards in the Abstergo's Challenge event?!? pic.twitter.com/PlztbKaK6S

The Valhalla skins were also leaked earlier this week but now we’ve had confirmation from Mediatonic that we’re getting them sooner rather than later, you can work on winning more crowns with our Fall Guys tips guide.