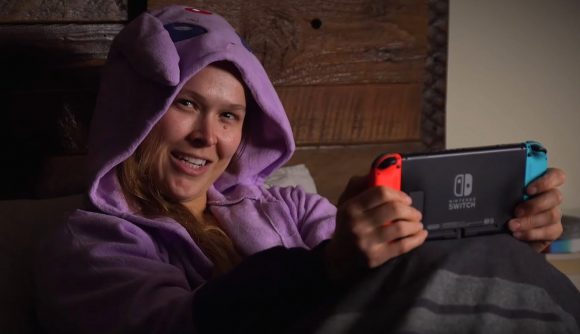 After becoming one of the world’s most famous fighters in both wrestling and MMA, Ronda Rousey is now turning her attention to a slightly less aggressive pastime: streaming video games.

The former UFC and WWE champion is hopping aboard the exclusivity deal train and announced on February 13 that she has signed with Facebook Gaming to stream video games content on the platform. Rousey says in an Instagram post that streaming is “one of the rawest and most authentic mediums” of entertainment and will kick off her streaming career on February 18 with a charity livestream of Pokemon Sword and Shield to help raise money for Australian bush fires recovery efforts. The 33-year-old also says in her announcement video that she has been “an avid gamer almost all her life” and that her broadcasts will be called ‘The Baddest Stream on the Planet.’

Facebook Gaming has been attempting to steal a bigger slice of the streaming pie and managed to poach the likes of Offline TV member Jeremy ‘Disguised Toast’ Wang and Smash streamer Gonzalo ‘Zero’ Barrios from Twitch with tempting exclusivity deals.

Rousey is not the only non-streamer to recently announce a partnership with a streaming service. While not specifically gaming-related, Fox-owned Caffeine recently announced that rapper Drake had signed a deal with them to bring the Ultimate Rap League to the platform.

Rousey has had previous cameos in the gaming industry, most famously by voicing Sonya in Mortal Kombat 11.