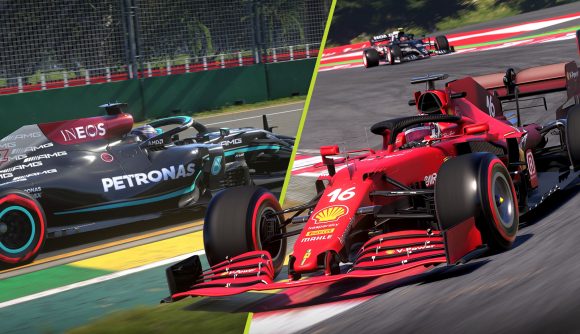 A countdown for F1 22, the latest entry into Codemaster’s long-running Formula One racing game series, has been revealed on publisher EA’s website. News about the game’s release date is expected to be unveiled tomorrow, April 21st 2022, alongside details regarding changes coming to the annual franchise.

The next title in the series has already revealed one small, but important, change: it will not be called F1 2022, but F1 22. This might seem like a small adjustment in the grand scale of things, but the change in format suggests a more fundamental shift in philosophy for the developer, particularly in the wake of Codemaster’s acquisition by EA in February 2021.

The upcoming racing game will be the first game in the series fully developed while under the EA Sports banner, as last year’s F1 2021 was already well into development at the still independent Codemasters before its release in July 2021 under EA. With the publisher known for its varied roster of blockbuster sports titles, and strong reception from critics last year, hopes are high for a good showing from F1 22.

The 2022 Formula 1 World Championship kicked off in Bahrain last March, meaning news about the latest game comes just over a month into the competition. This potentially sets the game for a July release, right in the middle of the season, which would be in line with the last two entries.

F1 22 is set to come out at an interesting time for Formula 1, with the latest championship introducing cleaner car designs for easier tailing, while significant changes were made to the safety car system that created controversy at the Abu Dhabi Grand Prix last year when Max Verstappen clenched the title-winning victory off the back of the system set in place last year.

As EA alludes in their countdown splash page, we are being invited to “enter a new era of Formula 1,” and the gaming giant might just be right about that. This season has thus far seen the meteoric rise of Ferrari’s Charles Leclerc to the top of the World Drivers’ Championship, a change of fortune for the world-renowned Italian company after several years of mediocre results behind Mercedes and Red Bull Racing.

Eager fans will be taking note of which features and modes will be returning to the F1 game series this year, especially after F1 2021 introduced a two-player campaign mode, and a new campaign mode, “Braking Point.” Fans will just have to wait until tomorrow to find out more information on what’s to come in this year’s instalment.

If you want to dip your toes into virtual racing while you wait for the F1 22 announcement, then check out the best PS5 racing games here – we also have a list of the best Xbox racing games too, if you prefer Microsoft’s console.