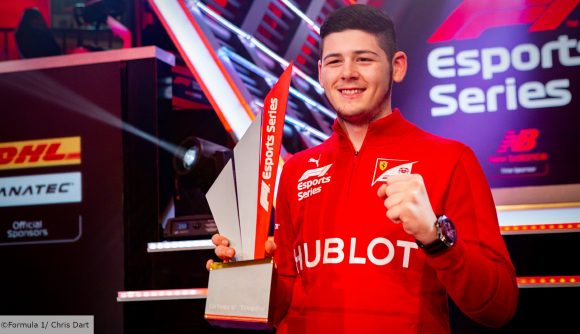 For a short period of 2020, sim racing was arguably the most popular form of live entertainment in the world. In the early weeks of the global lockdown, virtual races on the F1 2019 game were watched by hundreds of thousands of sports-starved fans from all corners of the world.

With virtual Grand Prix helping spread the word of sim racing far and wide, it’s no wonder that this year’s F1 Esports Pro Series competition is prepared to dish out its biggest prize pool in its three-year history, and one that puts in line with top-tier competitions like the ESL Pro League in Counter-Strike: Global Offensive. A total of $750,000 will be on the line for the drivers, whose 12-race championship kicks off on October 14 in a virtual Bahrain. It will also be the first high-profile event using the new F1 2020 game.

But it isn’t just the prize money and the game that’s changing. As with most esports competitions, the 2020 Pro Series is shifting solely online. There are also two brand new tracks to contend with in Vietnam’s Hanoi Street Circuit and The Netherlands’ Circuit Zandvoort. But the change that the pros are most excited about is an increase in race distance.

After a lot of feedback from the drivers and the viewers, this year’s Pro Series will have races set at 35% distance – an increase from last year’s 25% – in order to provide more opportunity for action and more scope for race strategies.

“I think the longer races are a good thing, both from a sporting perspective and for the public watching,” Mercedes’ F1 esports driver Brendon Leigh tells The Loadout in a press conference. “It’s good for the driver because we’re in the race for longer and we have more fun, and it’s also good for spectators because they get more race time.”

Leigh, who is a two-time F1 esports world champion, also reveals that he and the majority of the grid are not concerned with the Pro Series going completely online.

The longer race distances, plus another new Pro Series addition for 2020 in full qualifying sessions, are also an exciting prospect for Ferrari’s David Tonizza, the reigning Pro Series champion.

“I’m really happy about the new format,” the Italian tells us. “I actually want a longer race distance; maybe 50% of a normal F1 race. But with the schedule it’s impossible, so 35% distance is great for me. It’s a bit longer and we can do different strategies and we will also see more fights on track. Also in qualifying, there’ll be less traffic on the track so it will be easy to set a lap time compared to last year, so I’m definitely happy about these changes.”

The Pro Series’ improved format, stacked grid of drivers, and weighty prize pool are all real indicators that Formula 1 is taking its esports endeavours seriously. For Leigh, who has been part of the Pro Series from the beginning, seeing F1 start to really mature as an esport is a delight.

“For Formula 1 to be leading a charge in esports for us by taking the prize pool and publicity higher and higher each year is obviously a very good situation for me,” the British driver says. “I’m really just someone who loves driving cars around in circles, that’s sort of the reality of it. And now I’m lucky enough to say I can compete on the world stage that Formula 1 is giving me to fulfil my dream.”