While Formula 1 esports is still in its relative infancy compared to other mainstream titles, the third season of the F1 Esports Series has been a pivotal one. For the first time, all ten constructors in the actual F1 championship are involved in esports, and the levels at which the drivers are competing is higher than ever.

Despite finishing rock bottom of the Esports Series last year, the Renault Sport F1 team, who are partnered with French esports organisation Team Vitality, has seen a massive resurgence this season that sees them third on both the constructor and driver standings. Jarno Opmeer, who has past real life racing experience having come up through the Renault Sport academy, is now one of the top drivers on the virtual track and his teammate, Cedric Thome, has also had a strong showing this season and sits in tenth in the standings. The Loadout got the chance to chat with Opmeer and Thome at Renault’s Formula 1 base in Enstone, where both the physical and virtual F1 teams call home.

Here, the pair chat about their favourite circuits, their thoughts on Formula 1 esports, and how they are being supported with the tech and resources of an actual F1 team.

The Loadout: How crazy is it to have all the support and resources of the Renault F1 team to help you out in your virtual racing? And what exactly do you have here at Enstone to help you?

Opmeer: Obviously it’s important for us to train as much as possible not just in the game or in a simulator but also outside of it. We want to do everything perfectly.

We’ve got a Batak machine for quick reactions and coordination, the gym and personal trainer for physical fitness, and also the IT team who are literally 200 metres away and are monitoring our laps and can help us out with stuff. They can draw on small things like our setups, and they’ll come in really handy in the coming years as the cars become more advanced and complicated.

TL: Now while Jarno might be used to some of these things already having been a driver at Renault Sport’s academy, this must be really amazing for you Cedric as you’ve come into this solely from the gaming route.

Thome: Yeah it’s pretty surreal, if you think about it. It’s like you’re a real F1 driver, you know? The first time I got invited to Silverstone and I was in the F1 paddock and in Renault hospitality and it was just crazy. And being based here at Enstone is surreal. You have to get used to it, but that’s like what real F1 drivers think a lot too. They’ve got an entire factory behind them and they have to perform for them on track. 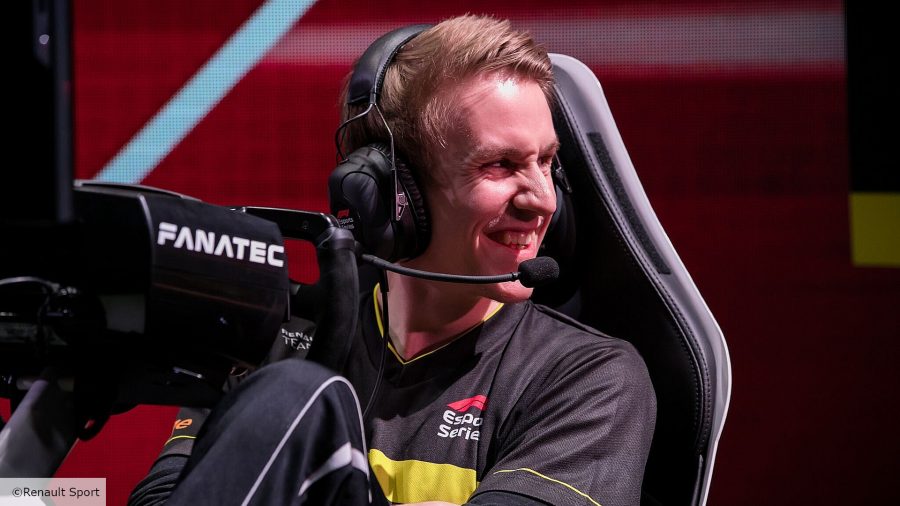 TL: What are your favourite tracks to drive in the F1 game?

JO: I have a few tracks I really like. I love Silverstone [Great Britain], I really like Suzuka [Japan], Circuit of the Americas [USA], China… Yeah they’re the ones I really like. More high-downforce sections in those tracks which suits me well.

CT: It’s Suzuka for me, definitely.

TL: Ah, so you both like Suzuka? Who’s faster round there?

CT: Well you’ll have to wait and see next Wednesday!

TL: How has this year’s F1 Esports Series gone for you, Cedric? Happy with where you’re at right now in tenth?

CT: Yeah it’s been a bit up and down really. Didn’t really go well in the first event, went great in the second event, then bad again in the third event, so that’s something I have to work on. I have won a race this season though, which I’m super happy about.

Related: The biggest esports tournaments of 2019

TL: And Jarno, you’re currently third in the standings with three races left to go. It’s a tall order but do you think you can swoop in at the end and grab the title?

I think Renault Vitality has a really good shot at the constructor title, but to win the driver title is going to be really hard. But I still think it’s possible.

Yesterday’s #F1Esports series started extremely well!
Here is the key moment when @jarno_opmeer took back the lead during the 15th lap of the first race, before crossing the finish line on the 1st place of the podium 🤩 #RSspirit #VforVictory @RenaultF1Team pic.twitter.com/t3Hq8gCGQ0

TL: While Formula 1 is arguably the biggest racing esport out there at the moment, but in the esports scene as a whole it’s a long way off being as popular as your Rocket League’s or CS:GO’s. What can be done to further grow F1 esports?

JO: I think the key thing is just giving it some time to grow, it’s still in its infancy right now. Even the first League of Legends tournaments wouldn’t have been the big-dollar events they are today. It needs time, but I also think they shouldn’t be scared of changing a few things up in order to attract a few more viewers. I think they’ve done really well so far though and it’s been growing super fast. It’s really exciting to see what the future holds.

CT: I think it’s a combination of time and also trying to engage the audience more. At the moment F1 has little atmosphere in the arena, it’s just the media in the arena. So yeah I think that one way to grow quicker is to introduce a live crowd and get the atmosphere up. It is also a case of just giving it time as we’re still quite new, but I think we’re doing well so far as an esport.

The final three races of the F1 Esports Series will be played on Wednesday, December 4 at the Gfinity Arena in London, where the F1 2019 champion will be crowned.