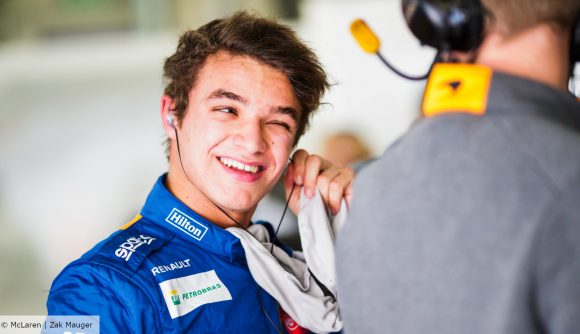 Formula 1 driver and streaming enthusiast Lando Norris was the most watched streamer on Twitch yesterday as F1 fans flocked to watch him compete in the Not the Australian Grand Prix event.

Peaking at over 70,000 viewers, Norris – who last year made his F1 debut with McLaren – was one of a number of famous faces competing in a virtual version of the cancelled Australian Grand Prix, which was organised by Veloce Esports. The multiple streams of the action from both Veloce and the race’s competitors collectively peaked at well over 100,000 viewers, with Norris’ stream bringing in most of it. His most watched stream prior to this drew in around 15,000 viewers.

A keen sim racer who has proven himself as a top virtual driver as well as on the tarmac, Norris’ charge from the back of the grid (after a hilarious disqualification in qualifying) to sixth position was the most watched stream on all of Twitch on Sunday, March 16.

Alongside Norris on the virtual McLaren team was popular YouTuber Will ‘WillNE’ Lenney, and the grid featured a number of famous faces from F1 2019 esports and content creation, former F1 drivers like Esteban Gutierrez, and even Real Madrid goalkeeper Thiabut Courtois.

The entire race was a huge success and could be an indicator of what is to come for the competitive and streaming scenes of sports games like F1 2019 as sports fans look to get their fix as coronavirus continues to cancel leagues and events around the world.

The esports scene has also been affected by the spread of COVID-19 with a number of tournaments and events being played behind closed doors or suspended, but many are now transitioning to an online format.