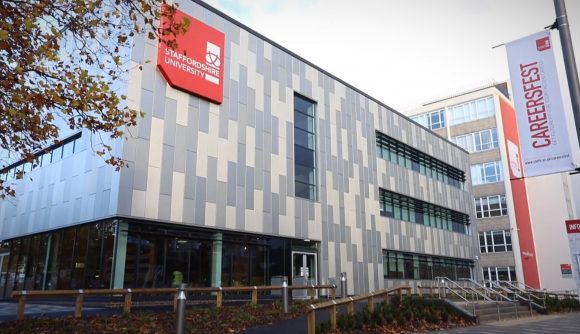 One of the biggest talking points in the industry at the moment is esports-focused education. More and more institutions are beginning to offer not only esports modules for traditional degrees in areas such as business or live event management but full-blown esports qualifications that touch on every aspect of the industry. However, the first university to create an esports-specific course in the United Kingdom has come under fire from its students.

A second-year Esports BA student at Staffordshire University, known by their Twitch handle ‘Soodlenoop’, first sparked debate after tweeting their dissatisfaction with the course. After highlighting issues Soodlenoop claims “productive and constructive” talks have begun with the head of department.

Speaking to The Loadout, another second-year Esports BA student, Rebecca ‘Yokai’ Forrester, explains why students are so unhappy with the course.

Yokai also says that it has felt “useless” attending her second year of studies, with the university doing a poor job of pivoting online due to the pandemic. She, and many other students that have spoke out publicly, say the content of lectures has been disappointing and unchallenging.

Students also claim that lectures often start much later than their scheduled time and often run far shorter than promised. Yoksai says one lecture, that was supposed to be two hours long, was wrapped up after “30-40 minutes.”

The students are also worried about the level of actual industry experience the lineup of lecturers at Staffordshire University have. While most were full of praise for a former League of Legends observer that left the teaching team last year, students say the remaining lecturers lack the expertise they were hoping for. Only two of the three lecturers currently shown on the university’s online prospectus have listed esports experience. Postgraduate research students have also been drafted in to help.

To try and help diversify the course content, some students even approached industry experts, like host and interviewer Frankie Ward, to come and be a guest lecture. These requests were reportedly shut down by the university, which was unwilling to pay.

It is absolutely shocking to me that these students at going to be heavily in debt at the end of this process and can’t do anything about it – they have clearly been trying for an extended period of time. The university should not be allowed to charge the highest fees.

Staffordshire University tells The Loadout that it is “confident that the vast majority of students on our courses are satisfied with their experience. As this is a first of its kind, we are learning as we grow and listening to student feedback.” It also says a number of students graduating this year from its first Esports BA cohort have already accepted jobs in the industry.

The university does however admit that “recent staff changes have temporarily altered the dynamic of the teaching team” but that it is working hard to recruit more lecturers to “keep pace with the growth of the course.”

With a lack of industry opportunities one of the main criticisms of Staffordshire University’s esports degree, it has “planned an employability week to help [students] engage with industry, receive advice, and share their experiences.” The university also notes that while it is proactively engaging with the esports industry, it “welcomes contact from professionals who wish to build relationships”.

The university also notes that all of its on-campus facilities are now open to students on the course despite the ongoing pandemic.