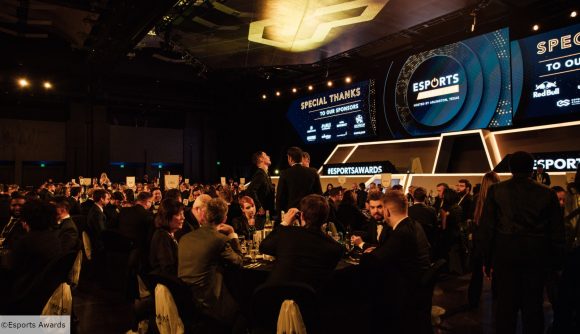 The next wave of nominees have been revealed ahead of this year’s Esports Awards, showing off 2020’s best esports titles, publishers, journalists, and more in the industry categories.

For the Esports Game of the Year award, the usual suspects of League of Legends, Dota 2, and CS:GO are joined by some surprise nominees, such as Codemasters’ F1 2019 and Riot Games’ FPS Valorant, whose esports scene is still in its early stages despite attracting a number of big name organisations. The category for Publisher of the Year also sees the expected big names in for a shot of winning an award, with the likes of Riot, Valve, Activision Blizzard, and Epic Games all being nominated.

With the esports industry attracting more and more massive sponsorship deals and partnerships, the Commercial Partner of the Year category sees well-known brands like BMW, Louis Vuitton, and Mastercard all nominated for their various activations and collaborations in the last 12 months.

The next esports icon to win a Lifetime Achievement Award has also been revealed, with Japanese fighting games legend Daigo Umehara becoming the latest recipient of the award. The 39-year-old has had a decorated career as a competitor, winning six EVO titles, and is widely regarded as the best Street Fighter player ever.

Here’s the full list of industry nominations at the 2020 Esports Awards:

Esports Game of the Year

Esports Publisher of the Year

Esports Commercial Partner of the Year

Esports Journalist of the Year

Esports Hardware Provider of the Year

Esports Supporting Agency of the Year

You can find the nominations for the first batch of awards, including Esports Personality and Streamer of the Year, right here.