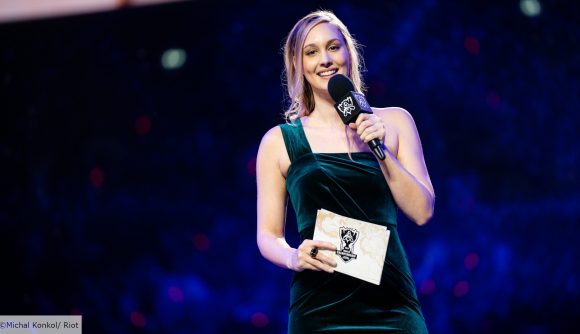 Eefje ‘Sjokz’ Depoortere is no stranger to the Esports Awards. Winner of the ‘Esports Personality of the Year’ award in 2017 and a multiple-nominee, she is also a panellist tasked with choosing the best esports talent in the world.

The League of Legends host is one of the most recognisable figures in esports, and is also up for two more awards at the 2019 Awards tonight, November 16. Sjokz could walk away from the ceremony with both ‘Host of the Year’ and her second ‘Personality of the Year’, but who else does she think deserves the awards, and which members of the industry does she think deserve more recognition.

Speaking to The Loadout, Sjokz revealed that she’d actually like a fellow League presenter to walk away with the Host of the Year award. “I’d like to see Dash [James Patterson] win,” she says. “I think for some reason he gets overlooked for a lot of these things. I think it’s because he’s not as strong a force on social media, but he’s such a consummate professional for so many years in the LCS and at Worlds and brings such a grandeur to the desk.”

Sjokz also dropped a hint at how she voted for ‘Caster of the Year.’

“I put a certain CS:GO caster as number one for Caster of the Year and I feel he deserves it very much. I don’t know if that’s too much info, I might get in trouble now!”

In the Personality of the Year category, Sjokz finds herself alongside the likes of last year’s winner Tyler ‘Ninja’ Blevins, fellow esports host Alex ‘Goldenboy’ Mendez, and NRG Esports’ CEO Hector ‘HECZ’ Rodriguez. But how does she feel to be consistently considered one of the most prominent figures in all of esports?

“It feels very good, I think I suffer a bit from imposter syndrome, so I find it hard to stand still and celebrate my own success,” she explains. “It’s something I don’t tend to do very often and this kind of pushes you to.

“It’s one of those things where you’re not really sad if you don’t get it because you can never be mad at people who win over you because they’re all so awesome, but we’ll see if I can snag another one this year!”

You can tune in to see who scoops all the prizes on the Esports Awards Twitch channel. The stream kicks off tonight, November 16, at 20:15 CST (02:15 BST on November 17).