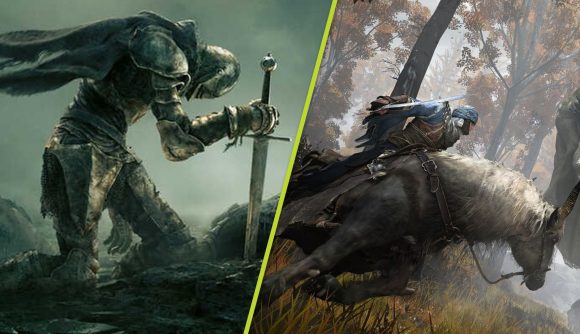 Elden Ring – the inescapable game. It is everywhere, and rightly so – we scoured it a big fat ten in our Elden Ring review. With all this hype and critical appraise, Elden Ring was always going to have a bumper opening week in terms of sales. While worldwide data isn’t out in the wild yet, UK sales data is in, and it makes for impressive reading.

As reported by GI.biz, Elden Ring has seen a colossal opening week of sales in the UK – so big in fact, that it’s the biggest opening week for a game that isn’t a Call of Duty or FIFA game since 2018’s Red Dead Redemption 2. To compare it to another open-world adventure that was released recently, its first week sales were 2.5 times higher than those of Horizon Forbidden West.

This should put into context just how massive Elden Ring is right now, and that all that hype and all those Pot Boy memes did translate into sales. For a game to be trumped only by the behemoths of CoD and FIFA in recent years is pretty remarkable.

GI.biz also looks at the platform breakdown of Elden Ring sales, and finds that when looking at combined digital and physical sales, PS5 was the most popular Elden Ring platform (just), followed by PC, Xbox, and PS4.

While no one is really that surprised Elden Ring has sold well, stacking it up against some of the other big hitters does really put things into perspective, especially when FromSoftware’s games have previously been considered rather niche.

If you’re one of the roughly eight people who decided not to pick up Elden Ring already, our Elden Ring walkthrough is here and waiting to help you out when you inevitably crumble and buy it.