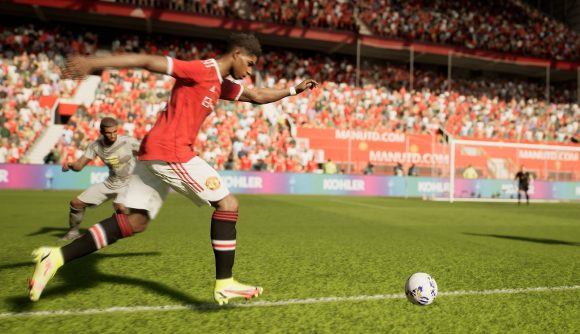 A whole host of eFootball gameplay details were revealed in a trailer last week, but despite touching upon exciting new features like the Duel Camera and explaining the five Team Playstyle tactics, the reveal left fans with yet more questions ahead of the eFootball release date.

eFootball trailers thus far have been great at generating hype for the new game, but often struggle to communicate how these new mechanics are designed to work. So, we’ve spoken to Konami to get the latest on three core features showcased in the gameplay trailer: custom tactics, the Duel Camera, and the new Sharp Kick mechanic.

For those hoping for a lot of different tactical options straight away at launch, you may be a tad disappointed. The trailer highlighted just five Team Playstyles, and Konami has confirmed to us that there are “no immediate plans to add more.” There will eventually be more opportunities to tinker with your team’s tactics with “the ability to give tactical instructions to each [individual] player.” This will, however, not be available at launch, and will instead be rolled out with a later update.

The Duel Camera – a new camera mode that zooms into individual one-on-one battles during matches – has been the subject of much contention among those waiting to get their hands on eFootball. While the dynamic camera aims to highlight Konami’s focus on one-on-one battles, many have worried they won’t be able to turn off the zooming or switch to more traditional camera modes.

Konami says that while you can’t turn off or alter the zoom in Duel Camera mode, standard camera modes will be on offer as well. “Stadium camera, Dynamic Wide camera, and others that were included in previous games will be available,” Konami tells The Loadout.

The final grey area from the gameplay trailer was around the new Sharp Kick mechanic, which takes more time for your player to perform but allows them to execute long, arcing passes or powerful, dipping shots. It was not totally clear from the trailer exactly how this would be performed, but Konami says that it will be manually performed by you with its own button bind.

Using a PS5 controller as an example, Konami confirms that Sharp Kicks are performed by “fully pressing the R2 trigger and kick button.”

As more information continues to trickle down to players as we approach the eFootball’s launch, stay tuned to The Loadout for more coverage over this free-to-play reboot of PES.