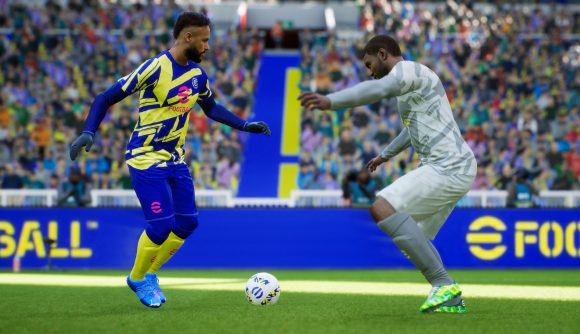 eFootball, the free-to-play revamp of the Pro Evolution Soccer Series by Konami, has had its first gameplay trailer shown off, and it gives fans a look at five Team Playstyle tactical setups, an overhaul to ball control and dribbling, a Sharp Kick mechanic, and much more.

While eFootball’s initial reveal earlier this year focused more on the new free-to-play, fully cross-play model that Konami was deploying, this gameplay trailer finally showcases how the game will look once you step onto the pitch. It’s clear both from the number of features dedicated to it, and the sentiment of series producer Seitaro Kimura during an interview with The Loadout a few weeks ago, that one-on-one battles and dribbling is one of the biggest gameplay factors.

The gameplay trailer details eFootball’s improved first touch system, a dribbling system where feinting and faking movements leads to “mind games” with your opponent, and gives a closer look at the previously announced Duel camera, which zooms into one-on-one battles.

The trailer also says that haptic feedback and adaptive triggers on the PS5’s DualSense controller will allow players to “feel the ball touch and the physical battles at their fingertips”.

On the defensive side of things, physical battles and a “slew of defensive manoeuvres” – such as lunging interceptions to cut out passes – were shown off.

For the tactical football minds among you, Team Playstyles were also broken down in the trailer. These are the tactical setup options that will tell the AI where to position your players to fit your playstyle.

While it won’t be available at launch and will come with an update later down the line, a new Sharp Kick mechanic was also featured. This is a distinct type of pass or shot that sees the player use the top of the boot to create rising and dipping shots or long, arcing high passes.

However, this is a “charge up” mechanic that will take a bit of time to execute, so the trailer suggests that you “create a situation where your player will have the time and space to perform it.”

It will be interesting to see if all of these new or reworked gameplay features can translate into an enjoyable and competitive experience across the ambitious spread of platforms that Konami is releasing eFootball on.