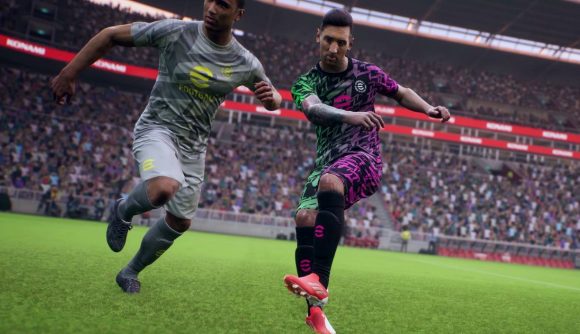 For years, Konami’s Pro Evolution Soccer series aimed to go toe to toe with FIFA with its own annual releases. It’s no secret that it’s struggled to make much of a dent in FIFA’s massive player base and reputation as the world’s number one football game by adopting a similar model.

However, with its rebrand to eFootball, it looks to offer an alternative experience that is free-to-play, offers full cross-play across consoles, PC, and mobile, and has a big focus on competitive play. But was the gravitation towards a free, live service model influenced by the success of some of the biggest games in other genres, such as Call of Duty: Warzone or Apex Legends? According to eFootball’s series producer, Seitaro Kimura, “the needs of the market” were apparent.

“We were working on a project to revamp the PES game engine to coincide with the release of the next generation of home game consoles such as the PlayStation 5 and Xbox Series X|S,” Kimura tells The Loadout. “At the same time, we knew that we needed to meet the needs of the market by making the game free-to-play and cross-platform, allowing players to compete and cooperate across devices.

“Following the major changes in the game engine and business aspects, we will create an impactful esports scene with cross-platform.”

Despite not necessarily being the biggest talking point following eFootball’s reveal last month, esports and a healthy competitive ecosystem are clearly top priorities for Konami.

Kimura says that now that anyone, regardless of platform or income, can compete, the goal is to make eFootball “the world’s largest esports platform”. Whether you interpret “esports” as an actual infrastructure like the FIFA Global Series, or as participation in eFootball’s competitive modes, it’s a lofty ambition that will require millions of players to achieve – many of which will have to be lured from FIFA.

Asked whether some changes – such as remapping some of the old PES controls for eFootball – were direct attempts to make the game more accessible for those used to its main rival, Kimura downplays that this is the main reason.

“I don’t mean to say that we don’t know how to control other games,” he says with a laugh, “but that is not the reason. In revamping the game engine, we focused on the most exciting part of football, the 1v1 battle. As we created the game system by deconstructing the mechanics of winning and losing in real-life 1v1 matches and the tactics used by top-level players, we had to restructure the control scheme in order for players to enjoy the evolved and realistic tactics.

“Actually, instead of having more complicated controls, the game is more intuitive and allows players to focus on matching up with their opponents, so we believe that people who have enjoyed the PES series in the past will be able to get used to it quickly and enjoy playing against each other.”

To find out more about what to expect when eFootball releases later this year, check out The Loadout’s conversations with Kimura about the benefits of playing on new-gen consoles and how Konami plans to monetise the game now that it’s free-to-play.