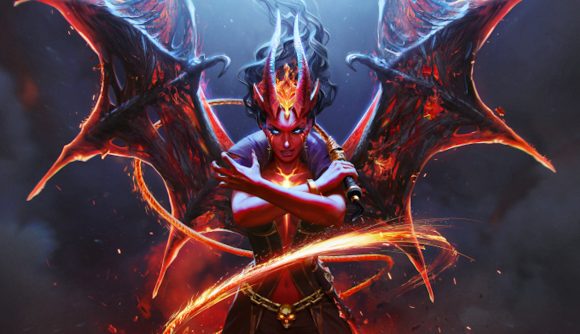 One week on from release, the new Dota 2 battle pass has raised more than $11 million for The International‘s prize pool. However, not everyone is happy with their purchase. If you’ve browsed the game’s subreddit recently, you’ll have noticed a series of complaints from players who believe the pass is more like a tiered payment system this year, rather than a legitimate battle pass.

The pass, which launched last Monday (May 25), comes with a new guilds system, a new summer event, and more. It also adds three new Arcana items and two Personas skins to the game, but some players feel these cosmetic items are unttainable by grinding the pass and they’ll have to spend more money to get them.

The level one pass costs $9.99 to pick up, but players can choose to purchase passes that grant them 50 or 100 levels if they want. However, the Pudge Persona is unlocked at level 255, the Anti Mage Persona at level 305, the Wraith King Arcana at level 375, the Queen of Pain Arcana at level 445, and the Wild Ranger Arcana at level 575.  Since the average player completes about 100-150 levels during the lifetime of the pass, some think this is unfair.

“There’s no gentle slope, you either spend $10 and get nothing or you spend $200 and get everything,” Redditor JakeInTheJungle says in his post criticising the pass. “There’s no reason to actually play the battle pass, doing all the achievements might save you $20 if you’re dedicated.”

“I’m very dissapointed in Valve to be honest,” another Reddit user Karkovar says in his post. “This battle pass is only aimed at whales.”

Although spending some extra cash has always been a part of previous battle passes, some feel the BP grind, which is harder than ever before due to the removal of daily and weekly challenges, simply isn’t worth it.

However, Valve hasn’t yet announced when the battle pass will come to an end. The developer has insisted that it will last the same duration as normal despite not running alongside the tournament, so that means there’s still a chance Valve might change the system – or extend the date – for players to grind.