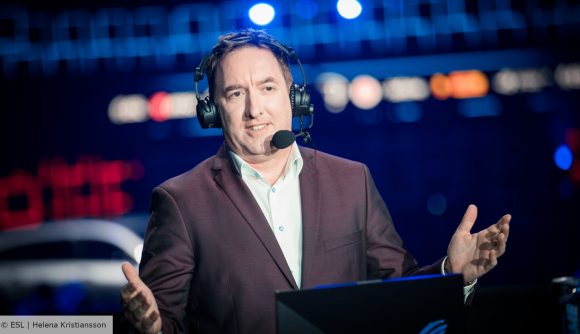 Last week, a number of allegations of abuse of power were levelled against esports host Paul ‘Redeye’ Chaloner and his talent agency Code Red Esports. Despite a back and forth with his accuser James Banks, Redeye has decided to call time on his esports career.

In a statement published on Twitter, Redeye says he has decided to “walk away from esports” after a number of “truths, half truths, and falsehoods” were posted online. The document containing the allegations, which is entitled ‘The Truth about Paul ‘Redeye’ Chaloner & Code Red’, makes a number of claims about about Redeye and his behaviour. While the esports host has denied the majority of allegations, he’s been left “utterly broken” by them and believes the only way he can deal with this is by “stepping away.”

As such, Redeye has resigned as managing director of Code Red with immediate effect. He will also no longer be hosting esports events or continuing a public life within esports.

While Redeye “strenuously denied” the majority of accusations made by Banks last week, the Brit has extended an apology in his statement to those he has “not treated very well” over the years. While he won’t be taking any new jobs in esports, he says the last week has been a “huge eye opener” and he’ll continue to “work hard on getting better.”

Following the attacks made on my character over the last few days, I have decided to walk away from esports. pic.twitter.com/mWHFVG9VJb

Redeye closes his statement by thanking his fans for supporting him over the years. He says: “I have loved my time in esports and would like to thank all the fans who have ever supported me. This is obviously not how I thought it would end for me in esports, but I am truly grateful for everything and proud to have been there to watch the industry grow and share the last 18 years of my life with you.”

The allegations against Redeye form part of a wider movement of people in esports and games coming forward to share their stories about harassment and abuse in the industry. Twitch recently launched an investigation into a number of sexual harassment and misconduct cases against streamers on its platform and it’s already begun banning those with “credible” evidence against them.