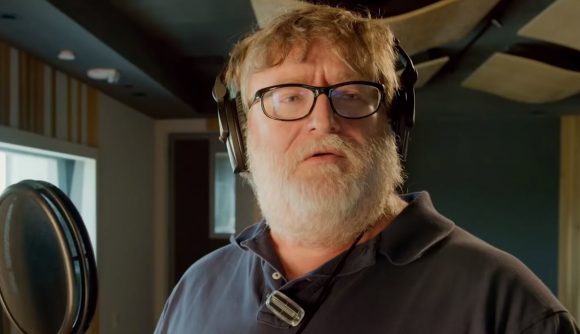 We all know that Dota 2 is Gabe Newell’s favourite when it comes to esports, but it turns out the Valve man really does has room in his heart for other titles and the industry as a whole.  In a recent interview, Newell says he’s delighted with the growth of the industry so far, and that he thinks there’s a bright future ahead for all involved.

“We think esports is great, we love it, it’s growing super-fast – and these things take a long time,” Newell says in an interview that you can find in Edge #344. “People have seen us sort of step away from immersive single-player experiences for a while, and a lot of that was that we saw more tractable experiences elsewhere. I mean, a typical gaming company would just keep cranking out sequel after sequel – but the reason people value Valve is that we’re supposed to be the ones picking interesting problems and solving them. It’s super exciting to be back in that space.”

Newell has made a number of appearances at Dota 2’s The International over the years, so the affinity the Valve co-founder has for the esport is clear. No such thing has happened in Counter-Strike: Global Offensive, but Valve gets involved with Valve-sponsored Majors every year.

But the value of the esports industry doesn’t just lie with leagues and tournaments – it lies with its players, and Newell is very aware of that. Using Team Secret’s Clement ‘Puppey’ Ivanov as an example, Newell says the industry’s best players are some of the best content creators out there and their superhuman skills will lead to them monetizing their careers outside of the competitive space. Former CS:GO pro, Michael ‘shroud’ Grzesiek is the perfect example of this.

“They happen to create really great entertainment experiences in the same way the creator of a mod or a level or a cosmetic would,” he adds. “I think that will continue to be super-entertainment. What may change is how their value is captured. The way that Puppey generates value right now is by creating spectacle, but he will always be a scarce commodity. Right now he monitises himself through tournaments. But there’ll probably end up being different ways of generating revenues for these kind of superfreak game players.”

Now we just have to wait and see what comes next.