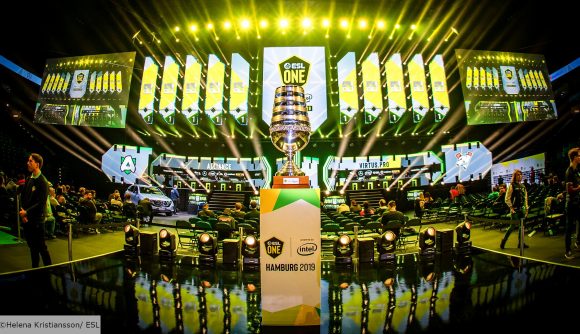 The ESL One Los Angeles has been postponed by Valve and ESL due to the ever-rising concerns surrounding the coronavirus.

The Dota 2 major was due to happen March 15-22, but will instead occur at a later, as yet unknown, date. According to a statement made on Twitter, the postponement is a result of health worries as well as US President Donald Trump’s newly sanctioned travel restrictions, which forbid travel from Europe to the US for 30 days starting March 13. “We are working closely with Valve to determine a new time and location for the Major,” ESL’s statement says. “We are deeply disappointed but believe this outcome is in the best interest of all the people who make these incredible events possible.”

Reportedly the initial idea was to host the major without a live audience, like the IEM Katowice, but in light of the travel ban the choice was made to just move the event away to a less tumultuous time of year. Ticket-holders should expect an email regarding refunds in the coming days.

Dota 2 is far from the only competitive scene being affected right now. Rocket League’s World Championship was outright canceled, and the Overwatch League has also postponed all upcoming homestands for the months of March and April.

ESL One Los Angeles, when it does happen, will be the first Dota 2 Major to be held in the US since the Boston Major in 2016. The next Dota 2 major on the calendar, Epicentre 2020 in Moscow in early May, is still expected to go ahead as planned.

Between the World Health Organisation declaring the coronavirus outbreak a pandemic on March and these new travel restrictions, we’re likely to see more disruption in the coming days and weeks as companies look to do what’s best for the health and safety of their players, crew, and fans.