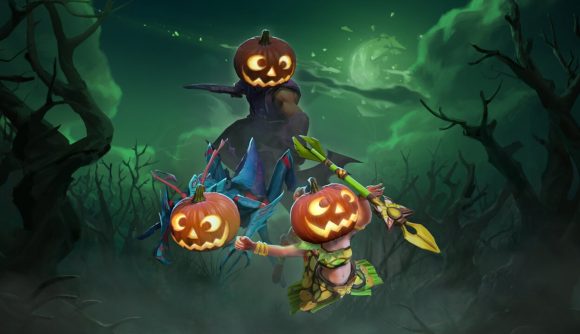 For the last seven years, Dota 2’s Diretide has been a meme. The Halloween mode first made an appearance in Valve’s MOBA in 2012, and, despite a fleeting appearance the following year, it’s never made return – until now.

That’s right, after years of begging Valve to do the right thing, the mode is back just in time for the spookiest day of the year – Halloween. Now though, it’s a best-of-five showdown in which you’re challenged to fill up your trick or treat buckets by stealing sweets from the enemy team, all while avoiding the hungry, angry beast that is Roshan.

Over the course of the Diretide season, which runs until December 22, players will be able to rack up Diretide points by playing the mode and regular ranked Dota 2 matches. Rewards will be granted to players every time they hit 100 points.

These rewards cover everything from chatlines and sound effects to spooky emoticons and death effects. If you’re big on Dota 2 cosmetics, you’ll want to check out the full list of Roshan’s rewards here.

Revamped treasure will also be dropped during the event and contain immortals and ultra-rare emblems. But be warned – these can only be opened by purchasing a key for $2.50.

Items unlocked from these chests will be immediately marketable though and can be traded up as groups of ten.

Who said Valve wouldn’t come in clutch before Halloween, eh?