It’s a Friday. The Friday after Witch Queen releases, in fact, and I’ve gathered what might be known as ‘The Boys’ – a trio of friends that play games together less and less as the years go on, mainly because of things like commitments and responsibilities. They’ve promised to chaperone me through Destiny 2’s new Witch Queen content because I am a complete novice.

I was made aware that Destiny 2 isn’t particularly friendly to new players, but some quick messages back and forth beforehand made the plan clear: hop into the game, create a character, do a bit of tutorial, and then we’ll yeet straight into the Witch Queen expansion. How naive we were.

It turns out that Destiny 2 has had more nips and tucks than Katie Price, and I soon found my freshly made robot character (I’m told the term is ‘Exo’) in a place familiar to players of the original Destiny – Old Russia. “Oh, yeah. They kind of… re-jigged it,” someone explains when I broach the topic. So I just woke up in the middle of nowhere, in an opening extremely similar to the almost decade-old original Destiny but with less explanation.

The questions begin again. ‘Who’s the woman with the blindfold?’ I ask as we watch some people talk space nonsense

You actually have to spend a good two hours in this Old Russia opening section, so with the help of The Boys, I chunk my way through this frankly boring introduction to the game. Throughout this time I had to ask more questions than I’ve ever had to in my life. ‘What is Light?’ ‘What is Silver?’ ‘Why are there so many menus?’ ‘How do I check my objectives even when I have deployed my Ghost?’ ‘What button is my super again?’ ‘Who are all these people I’m killing?’

Finally, after a good old slog, we make it to the Tower, which is the hub for all activity in the game – or so I’m told. I spend a good 15 minutes here running around talking to NPCs that I recognise from the trailers, like Zavala, the blue guy. There’s lore exposition that I don’t even understand, but each of these NPCs does things, but what it is exactly I’m not sure. Hopefully, I’ll never have to return to them for anything special like upgrading weapons, or I fear I’ll starve to death in the Tower looking for the right person.

The good news is that at this point you can access the Witch Queen content. So I, of course, let The Boys navigate Destiny’s web of confusing interfaces so I could continue to live a peaceful life. After a short while, we were quickly teleported into spacecraft orbiting a planet, and when we landed, the Witch Queen cutscenes start. 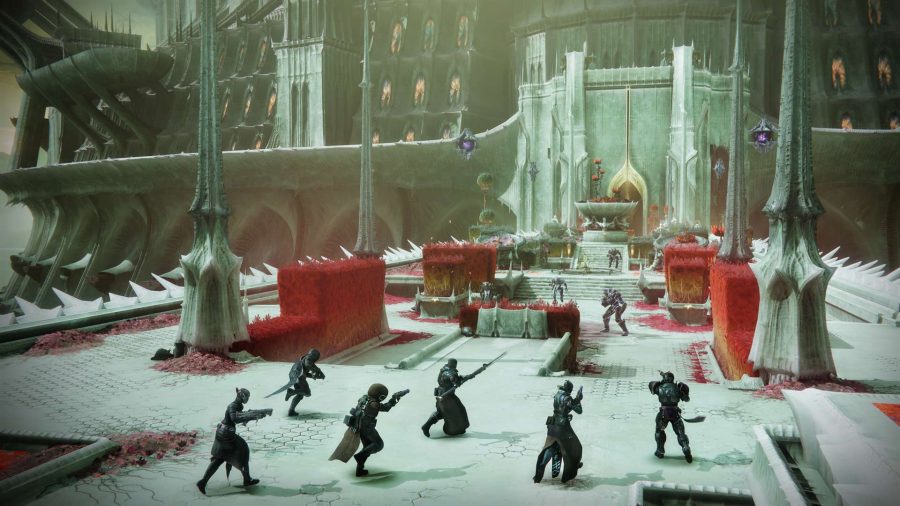 The questions begin again. ‘Who’s the woman with the blindfold?’ I ask as we watch some people talk space nonsense, even though I thought that was a reasonable question. The answer, apparently, has something to do with previous expansion and we still don’t know if she’s good or bad yet, but she’s got black gunk coming from her eyes and a bit of green coming off her like an aura.

I suspend my disbelief and chock it up to space wizards. Some cutscene chatting later and we figure out we have to investigate why some lady called Savathun’s ship-looking thing is hovering above the bandaged-eye woman’s planet. We’re there at the behest of an NPC called Ikora, and she isn’t best pleased about Savathun’s appearance.

On approach, we are sucked into what they call a “throne world,” which is fair enough, I guess, Savathun is the Witch Queen after all. Who am I to say she can’t have a throne world? In any case, the Witch Queen and her Hive (I’m learning) amigos aren’t happy to see us, so we fight and parkour our way through the mission. We eventually come to the boss, who can resurrect themselves even after we kill it, and when we get a big old mission complete screen, we’re rewarded with a glaive – a kind of spear that shoots projectiles like in Stargate. 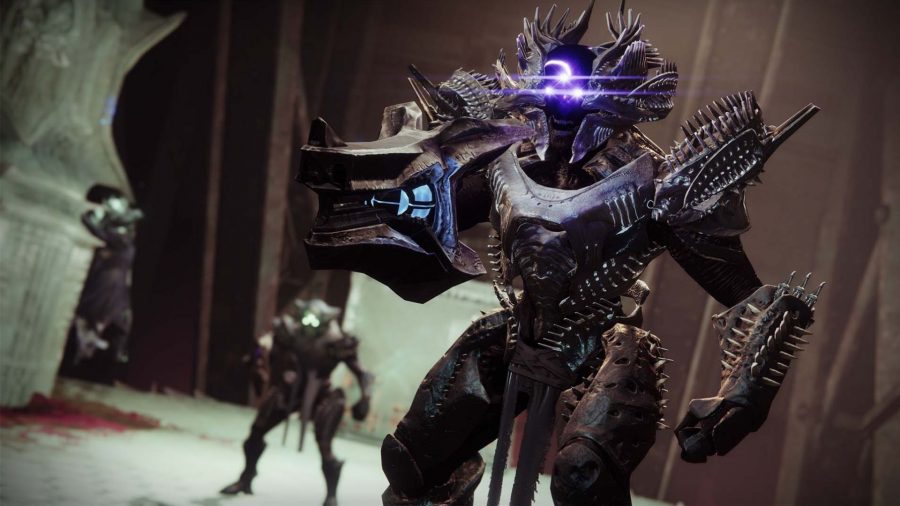 While the mission was fun to play with friends – especially those that actually know what they’re doing, I can’t help but be confused by the Frankenstein nature of the game as a whole. The previous expansions, the retconned lore, and the obfuscated story make it near impossible for newcomers to understand, let alone learn. Even if you ask long-time players what it all means, it becomes clear that nobody can really explain what’s going on; they can tell you what happened previously, but they can’t explain it.

The combat is fun once you get the hang of it, and there’s a noticeable step up in quality from the base game’s opening hours to when you jump into the Witch Queen content, but there are just an overwhelming amount of systems, processes, and currencies rammed into Destiny 2 that it’s hard to find a wider joy beyond a short session here and there with friends.

I haven’t made my way through all of the Witch Queen expansion yet, and so, disappointingly, I still haven’t gunned down said Witch Queen (if that’s something you even get to do). I’m not sure I ever will, because it’s certainly a game that’s made for group play and wrapped in a confusing world that leaves too much to the imagination.

It’s painfully obvious to the newcomer that Destiny 2 is starting to creak under the weight of its own decalcified bones, and for those longing to do more than shoot a couple of space aliens, I fear that Destiny 3 might be the best bet.