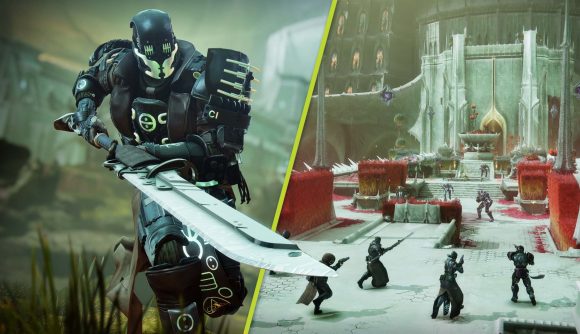 Destiny 2’s latest expansion, The Witch Queen, brought with it many changes, but one of the notable introductions was that of a new Glaive weapon type. It’s a staff with a sword tip that fires projectiles, but it also has a melee attack. Discussion around how to use these new weapons and their role in the game has been debated since their introduction, but the conversation has now reached a crescendo.

The reason for this is that Destiny 2’s hotfix 4.0.0.5 brings a nerf to the Suppressing Glaive armour mod. The mod previously allowed you to chain Suppression effects on enemies by melee attacking them, but after the hotfix, melee attacks consume energy – and that energy can be refilled by landing four ranged hits on enemies.

This has led to players being confused over the role of the Glaive, as the weapons main function was thought to be as a melee weapon primarily, but the changes mean it’s going to put more emphasis on dealing ranged damage.

Reddit user ‘ThePessimisticLemon’ is frustrated with the situation. “Seriously, you advertised it as a melee oriented weapon,” they say, “one that should benefit from being used as such, yet everything you’ve put on glaives (including perks, ammo economy, and now mods with the recent hotfix) are completely flipping that idea.”

This appears to be a relatively widespread opinion among the Destiny community. “The entire energy mechanic is missing the point of how much I do not want to shoot stuff with my glaive most of the time,” Forbes journalist Paul Tassi states on Twitter. The nerf has even spawned memes on Reddit from users who feel similarly.

We’ve been detailing our time with the games latest updates and found that Destiny 2 The Witch Queen is addictive, but it’s also a confusing experience that has far too many menus and systems that are constantly changing, which makes it hard to keep track of what’s going on, and the Glaive nerf is representative of this as it doesn’t give players a clear idea of how to utilise the weapon.