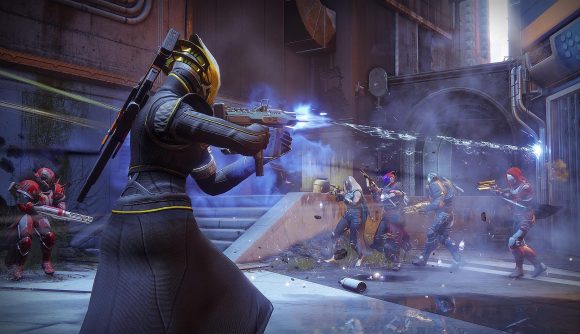 Destiny streamer Sean ‘Gladd’ Gallagher has set a new Twitch record thanks to a 42-hour stream, a drops incentive in Destiny 2, and an army of loyal viewers.

During Gladd’s stream, which began on June 30 and wrapped up early on July 2, he set a new record for the biggest sub train ever on Twitch, with the total of consecutive subs sitting at a massive 28,129 when he called time on his stream. The massive chain of subscribers brings Gladd’s total sub count to over 40,000, meaning he is now one of the most subbed to streamers on the entire platform.

This particular Destiny 2 drops scheme sees players rewarded with in-game items if they gift two subs to a Destiny streamer, and it seems like a large percentage of the player base gravitated towards Gladd’s stream. An extremely grateful and exhausted Gladd was left amazed as he concluded his 42-hour marathon stream and thanked his viewers for helping him break the sub train world record.

“Last thank you, ya’ll are amazing,” says Gladd. “28,000… Spread the news man, this is awesome, thank you for being a part of history. Absolutely fucking outstanding. I adore each and every one of you.”

Gladd’s stream was not without some controversy, however, after he reran some past footage while he took a break from the stream. He later apologised on Twitter, saying that his judgement as a prominent figure in the community was “clouded.”

I understand that I am a barrier to other streamers when I keep my channel live during (any) event.

My actions earlier went against what I always preach, I didn’t see this at the time, and I made a mistake.

Some saw this as an attempt to keep his sub train rolling while not actively streaming and drawing viewership away from smaller Destiny streamers who were actually active.

Despite that blemish, it’s still an extraordinary feat and a record that will likely stand for some time.