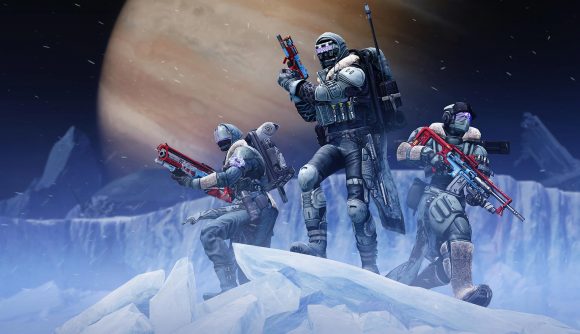 Destiny 2’s latest expansion, Beyond Light, has really shaken things up with new exotics, the new Stasis subclass that lets you wield the Darkness, and of course the beautiful, icy new world of Europa.

All of that is grand, but what many of Destiny 2’s hardcore playerbase were really looking forward to is a brand new raid and, of course, the challenge of being the first to complete it. Well, the latest World’s First challenge has now been verified by developers Bungie, and it is fireteam Luminous that was the first to complete the new Deep Stone Crypt raid in just under five and a half hours.

The raid itself looks to be one of the best ever introduced into Destiny 2, with some brain-bending puzzles. The storyline also rockets you off of the frozen terrain of Europa and into space to continue the battle on a massive satellite. The views are spectacular.

The Luminous fireteam, which is comprised of ‘Aoterra’, ‘Claw’, ‘Flux’, ‘Schendzie’, ‘SiegeDancers’, and ‘Sotosolice’, was crowned victorious around 24 hours after it had cleared Deep Stone Crypt, once Bungie’s verification process had been completed.

Each member of the six-man squad will now receive a shiny World’s First emblem to flex their achievement.

According to Dexerto, the official time for Luminous’ Deep Stone Crypt run was five hours and 29 minutes, which was 12 minutes faster than second place clan Elysium.

The completion of the raid also made three new Beyond Light exotics available. The Eyes of Tomorrow rocket launcher was revealed as a random drop reward for clearing Deep Stone Crypt, a quest line for the new sword The Lament appeared, and Empire Hunts would now drop the Cloudstrike sniper rifle as a random drop reward.

The race to become World’s First saw Destiny 2 draw in massive viewership on streaming platforms. Over the course of the weekend (November 21-22) Destiny 2 racked up more hours watched than Among Us, FIFA 21, and Call of Duty: Black Ops Cold War, according to Esports Charts Pro.