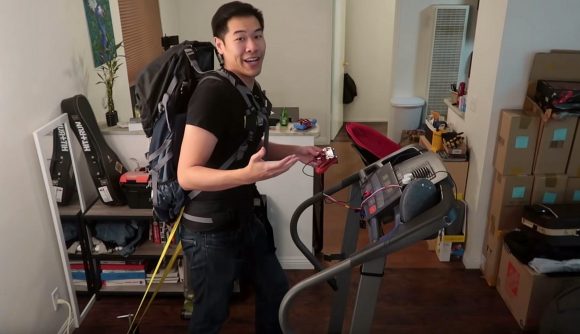 When the highly-anticipated Death Stranding dropped late last year, it was one of the most talked about and most watched games on the planet. A few short weeks later, once it’s gripping story was all played out it had all but faded into irrelevancy.

However, one fan has attempted to revive Death Stranding by creating an all new way to play that will make Sam Porter Bridges’ often tedious courier tasks a little more interactive. YouTuber and engineer Allen Pan, who uploads videos of him making ridiculous inventions, hooked up a broken treadmill to his PlayStation controller so that he could walk the vast expanses of Death Stranding for himself. After a fair bit of tinkering and attaching a rucksack and some resistance straps to the back of the treadmill, Pan had built himself a contraption that really takes the ‘walking simulator’ aspect of the game to new heights.

Pan’s treadmill controller has even been noticed by the game’s director, Hideo Kojima, and the actor behind Death Stranding’s main character, Norman Reedus, with the latter tweeting that his creation was “amazing.”

As well as Pan’s unconventional controller, we’ve seen a number of other examples of inventive gamers finding new ways to play their favourite titles.

Twitch streamer Rudeism decided to become the goose in Untitled Goose Game, while YouTuber SuperLouis64 thought the best way to play Call of Duty: Modern Warfare would be with a set of Donkey Kong bongos.