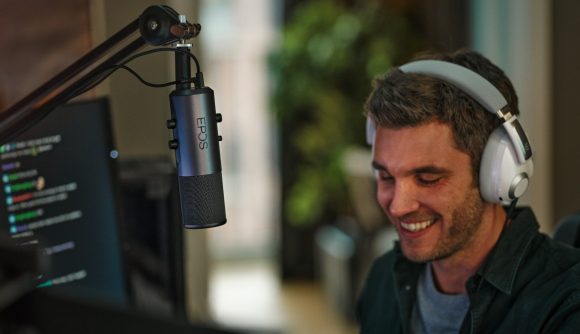 There’s something about studio-quality microphones. Whether it’s the crystal clear audio or the fact you can change audio levels on the fly, top notch microphones are a must for those serious about streaming. If that sounds like you, you’re in luck because we’re giving away three microphones that’ll blow you away.

That’s right, we’ve teamed up with EPOS to give away not one, not two, but three of its new B20 streaming microphones. These mics are USB, and compatible with PC, Mac, and PS4s, allowing you to completely revamp your streaming setup.

But what’s so special about the B20? Other than boasting studio broadcast quality (24bit 48kHz), the B20 is one of the most versatile microphones on the market. That’s because it’s USB for ease of use, and because the B20 has four ranges of sound pickup – cardioid, stereo, bidirectional, and omnidirectional. In addition to that, it has volume, gain, and mute buttons, as well as a headphone jack that allows real-time voice monitoring and mixing.

So whether you’re planning on a solo stream, team-play broadcast, or even a co-stream, the B20 has something for everyone. And, providing you’ve got lady luck on your side, you could nab one of these $199/£179 microphones for yourself.

Sounds good, right? To throw your hat into the ring for this global giveaway, complete the actions required via the Gleam widget below. We don’t need too much from you, but we do need your full name and email address so we can contact you if you’re one of the lucky winners next week. Don’t worry though, we promise we won’t send you spam.

You’re also going to want to check out our full terms and conditions before you enter here.