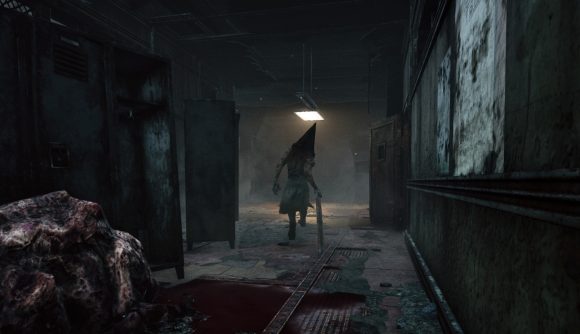 Whenever there’s a new update for Dead by Daylight, Behaviour Interactive usually shares an advanced build of the game with a trusted group of content creators known as the Fog Whisperers. But the game’s latest chapter, which brings the world of Silent Hill into the Entity’s Realm, was such a big deal that it was kept a secret from pretty much everyone outside of the company.

The new chapter, which marks the game’s fourth anniversary, brings Midwich Elementary School, Pyramid Head, and Cheryl Mason to the game. Keeping the latest additions away from the spotlight has proved difficult for Behaviour Interactive – especially since it had to send a few select players a blank canvas build of The Executioner to try – but it’s a challenge Mathieu Côté, Dead by Daylight’s game director, has relished.

“We didn’t tell anyone. We’ve had difficulties in the past with keeping things a secret,” Côté tells The Loadout over Skype. “We love the Fog Whisperers very, very much but one of the things we’re really looking forward to is seeing their reactions to the news.”

Given the Fog Whisperers helped the game climb to the top of Twitch’s horror charts last year, the Behaviour Interactive team believes the content creators could hold the key to making this chapter a huge success – and keeping it a secret was all part of the plan.

“Twitch is a weird creature,” Côté adds. “It’s weird but we do expect there’s going to be a huge spike of viewership and have a few of the bigger streamers coming back . I think in this specific case, we’re going to see a bigger spike for sure – if it stays or if it plateaus we don’t know, it’s always a bit of a mystery.”

Now that the news is out in the open, though, Côté and his team can’t wait to see what their players do when The Executioner and Mason enter the fog on June 16.