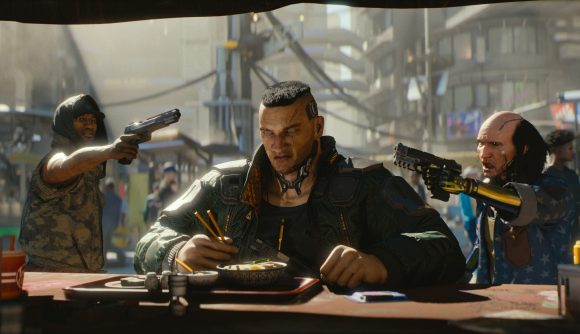 We all knew that Cyberpunk 2077 was going to be a huge hit, with CD Projekt Red’s hotly-anticipated RPG never really falling off the radar since its initial reveal all the way back in 2012. And, in terms of day one metrics, it’s more than hit the mark, with millions of players logging on to experience V’s escapades through the neon-drenched Night City.

Although reviews have fairly been mixed, they have for the most part been fairly positive. Although several pesky bugs seem to be breaking the overall immersion at the moment. These reports have not deterred eager players, however, and we can see that from the game’s monstrous performance on Steam.

At its peak, Cyberpunk 2077 managed to break the one million concurrent player ceiling (1,030,395 according to SteamDB); the first time this has been achieved by a single-player title. To put it into perspective, the only titles which have reached loftier heights on the platform are the juggernauts of PlayerUnknown’s Battlegroudns, Counter-Strike: Global Offensive, and Dota 2. In fact, the gap at the top is so large that the two games immediately below Cyberpunk – Terraria and Fallout 4 – barely reached the 500,000 mark, despite the latter shipping what was then a record-breaking 12 million copies on launch back in 2015.

The story over on streaming platform Twitch is a similar one. Reaching a peak concurrent viewership of 1.14 million (according to Twitch Tracker), Cyberpunk 2077 once again sits alone at the top of the single-player mountain. Of its Steam-based superiors, only CS:GO has managed a greater peak, superseded only by the usual suspects of Valorant, League of Legends, and Fortnite. At the very top however remains the Special Events category following the PS5’s reveal event earlier this year, which itself reeled in a gargantuan 2.8 million viewers.

Contributing to this record-breaking launch, Twitch’s biggest streamers have been quick to dive into the Cyberpunk experience, admiring the game’s story, world, and long… long list of character creation options. *cough*. However, with the threat of bans looming over those who may have perhaps showcased a bit too much, we may see a few of our favourite faces disappear for a little while.