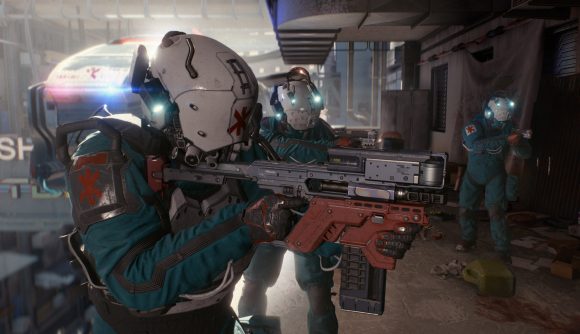 08/12/2020 CD Projekt Red has now publicly addressed the concerns around epileptic seizures and tells The Loadout it is “shaken” by the reports.

Cyberpunk 2077’s braindance feature has drawn serious concern from members of the gaming community as a report from Game Informer warns of the game’s potential seizure triggers, particularly for players with epilepsy.

While recounting her own experiences, Game Informer associate editor Liana Ruppert – who herself suffered a grand mal seizure while playing through CD Projekt Red’s latest offering – issues a series of warnings to prospective players, with a particular focus on the rapid blinking lights found within the headset required to dive into a braindance.

“The headset fits over both eyes and features a rapid onslaught of white and red blinking LEDs, much like the actual device neurologists use in real life to trigger a seizure when they need to trigger one for diagnosis purposes,” Ruppert notes. “If not modelled off of the IRL design, it’s a very spot-on coincidence, and because of that this is one aspect that I would personally advise you to avoid altogether.” Ruppert’s final comment is stark: “This is a pattern of lights designed to trigger an epileptic episode and it very much did that in my own personal playthrough.”

A braindance involves players diving into the memories of (usually deceased) characters in order to attain vital information. As a core component of Cyberpunk’s story, braindancing cannot be altogether avoided. Other potential triggers Ruppert draws attention to include “glitch animations” within the layers of the braindance interface, as well as other glitching effects throughout the wider game itself.

For now, Ruppert advises players look away from the screen or close their eyes when the braindance device looks to come into play. She also suggests that players should turn down their screen’s brightness, while experimenting with the colourblind modes to help protect against the glitching effects.

With CDPR setting a content embargo for Cyberpunk streamers, a massive wave of viewership is expected to hit platforms like Twitch when it is lifted on December 10. Without in-game warnings, or options to remove or alter the braindance sections of gameplay, this could potentially cause issues for epileptic viewers wanting to watch Cyberpunk playthroughs.

Streamers hoping to share the Cyberpunk experience with their communities have subsequently been urged by community peers to hold off for now, or at least ensure proper warnings are put in place to help protect viewers, until appropriate measures are taken by CDPR to fix the issue.

To my streamer friends: I'm not discussing this game past this, but if you stream Cyberpunk 2077 please mention or add content warnings that it has intense flashing light sequences that can cause seizures.

CD Projekt Red has now reportedly added an in-game seizure warning that appears at the start of the game, in addition to the epilepsy warning in its End User Licence Agreement. A “more permanent solution” is also in the works for the longer term, with Ruppert involved in the process.

The Loadout had previously requested comment from CDPR, with a studio spokesperson responding that it had reached out to Ruppert after her initial report left the Cyberpunk team “shaken”. CDPR had also promised to introduce the in-game seizure warning, while posting warnings to social media about the braindance device’s potential to cause seizures.