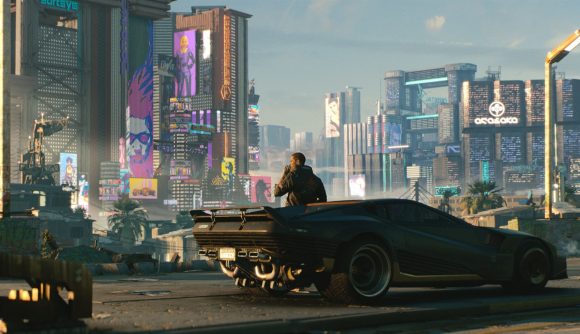 Cyberpunk 2077 developer CD Projekt Red has announced Patch 1.2 for the infamous RPG, fixing numerous issues that players were experiencing. The full patch notes consist of nearly 500 changes and 8,000 words so we won’t bore you with every detail, but the headlines are improvements to in-game driving and stability for base console players.

Those of you who are using an AMD GPU will rejoice, as the update should introduce ray tracing support (which has been standard for Nvidia owners since day one). Gameplay-wise, CDPR is implementing a lot of changes for driving in Night City. As well as adding a Steering Sensitivity slider for all input devices, the steering code has been updated to make driving more consistent “in low and extreme high frame rate situations.”

This particular fix is aimed at improving driving on base consoles – the PlayStation 4 and Xbox One respectively – in particular. Whether 484 changes and updates are enough to salvage the bug-ridden RPG remains to be seen, however. There is still no word on a next-gen update for PlayStation 5 and Xbox Series players who want to roleplay in Night City.

The majority of changes are for quests, which fix bugs and NPC behaviour in specific situations, but gameplay, cinematic design, and UI all also receive plenty of attention in Patch 1.2. Xbox players will be particularly excited to learn that their console will no longer brick if they load up a game while V is in a car, and players across all platforms should no longer encounter glitches involving dismembered heads.

The typo on the “Leaving Night City” sign has also been fixed for all the grammar pedants out there, and Breach Protocol quickhack now works correctly against Sasquatch – that’s the gang leader, not the cryptid.

Patch 1.2 for Cyberpunk 2077 is coming soon! Here’s a list of the most notable changes coming in this update:https://t.co/wNRJL2mwj9 pic.twitter.com/Fc2lU1474W

The patch will be live for PC, consoles, and Stadia “soon,” according to CDPR, but we have no concrete date at the moment. It is also worth noting that the patch notes end with the phrase, “and many more,” so who knows how many subtle changes will actually be made. If you want to check out the complete list of changes in the patch notes, then we recommend heading to the official site.

Cyberpunk 2077 remains unavailable on the PlayStation Store, so if you’re looking for an alternative on the console, check out what’s currently available for free on PS Plus.