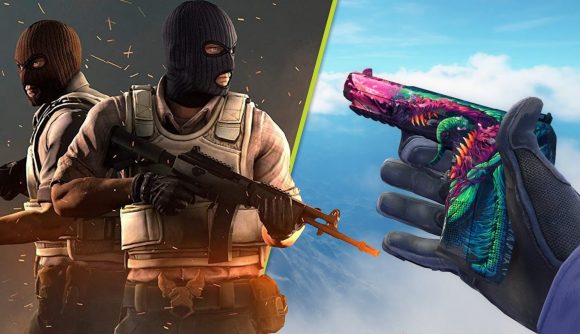 It’s always the simple games that take the world by storm and Wordle is no different. Josh Wardle’s web-based word game, which has been bought by the New York Times, has spawned a rush for quick and simple brainteasers that refresh each day. And if the word-based game isn’t enough for you, someone’s made a version for Counter-Strike: Global Offensive fans using the best CS:GO skins.

CS:GOrdle takes the tried and tested Wordle format but puts a CS:GO spin on it – replacing letters with categories and words with skins. You’ll have eight attempts to guess the skin – and after making your first guess – you’ll have to work out whether you’re on the right track by looking at the condition, rarity, price, paint, weapon, and category.

For example, if the skin of the day is a Factory New M4A4 Asiimov and you guess a Factory New M4A4 Bullet Rain, the crates for condition, rarity, and weapon would be green. The category crate indicates whether a gun is T-sided, CT-sided, or both – so you’ll want to scrub up on your buy menu options before you give this a shot.

At the moment, CS:GOrdle only features gun skins, so don’t expect to put your knife skin knowledge to the test. The creator ‘Holla‘ is also planning on making a hint button in the future – early feedback from Reddit suggests people are finding it a bit of a challenge.

But it’s not as difficult as climbing the CS:GO ranks. After all, trying to hit Global Elite while using the best CS:GO crosshair is quite a feat. At least neat little game will help you pass the time between matches.